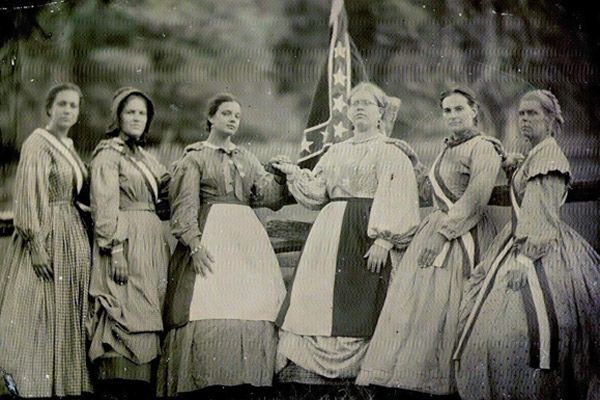 The influence of Southern women upon Confederate soldiers bears upon the minds of Southern Baptists. Alcohol, identified as one of the greatest evils in camp life — and considered a catalyst for other evils — must be curtailed. Home front Southern Baptist ministers and denominational leaders look to women to save men from evil spirits.

But are Southern women doing enough to save the Confederacy? An editorial in the Baptist press takes women to task for falling short of their duty:

The experience of the South in the present conflict demonstrates, (if demonstration were needed) how grossly Plato misconceived the true source of woman’s power to strengthen her country in time of war, when he made it the law of his perfect ‘Republic,’ that she should be trained to arms. Woman must first belie her sex, before she could assume the part of the soldier. Her’s is a nobler mission.

She is the soldier’s mother, wife, sister, daughter. Her influence in these relations, the gentlest, purest and strongest, which appeals to our nature from the human side, serves to hold him steadfast in the way of honor.

She is the soldier’s intercessor. Her prayers, ascending day and night, win to his succor the aids of grace–the only influence appealing to our nature from the divine side, and therefore infinitely outweighing all others.

She is the soldier’s benefactress. Lavish of her means and patient in her toil, she cheers the camp with countless tokens of remembrance, to supply his wants and to alleviate his privations.

She is the soldier’s nurse. When disease wastes him, when he languishes from wounds received in the shock of battle, more than the good Samaritan lives again in her, for the offices which the Samaritan entrusted to others, she illumes with her own presence and performs with her own hands.

She is the soldier’s exemplar. The scorn with which she repels disloyalty, the fearlessness with which she confronts danger, the smile with which she treads the path of unwonted self-denials–these are an inspiration, and as he looks upon them he kindles into a hero.

But we have somewhat against woman in the matter of the present war. She has not sufficiently fulfilled the functions of the soldier’s mentor. She has flattered and feted drunken officers, until they have brought our cause to the verge of ruin. A thousand murders may lie “bosomed up” in the intemperance of an officer; it may work out the dire results of treason, and bind the yoke of the oppressor about our necks; and yet woman has affected not to see it–has labored to mould no popular sentiment which might frown it down–has suffered the deadly current to sweep on, without putting forth her utmost might of influence to arrest it. Oh, if she would but address herself to this task new, if in conversation and by letter, she would become the earnest (and therefore eloquent) advocate of sobriety, if she would bar the officer who loves strong drink from the Eden of her presence, would not our military affairs soon take a more hopeful aspect? We make no doubt of it.

On the other hand, an anonymous letter writer asserts that women are doing their part to remove alcohol from Confederate camp life:

I think that King Alcohol is in the road to sure destruction. Not only have the civil and military authorities taken up the cudgel, but the ladies have also entered the lists, in earnest against him. In proof of this I give you the following incident.

Recently a money-loving man had 900 gallons of spirits at Newton Depot, Catawba county [NC], intending to send it off to the camps, to do its deadly work among our soldiers. The ladies of the neighborhood, knowing the danger which thus threatened their loves ones in the army, and fired with indigination at such a want of patriotism and philanthropy, went to the Depot, rolled out the barrels, and with hatchet and hammer, burst them in pieces, giving to the earth,–a drinker of much greater capacity,–the liquid poison, prepared for our soldirs.

I am glad to see the ladies taking so decided a position against King Alcohol. If they will, everywhere, throughout our Confederacy, set their face resolutely against him and discountenance all those,–no matter what their position,–who tamper with him or yield to his seductive but degrading influences, his reign will soon end.

The Temperance Movement, led by women and long a major force in the North, is thus receiving a boost in the Confederacy from Southern Baptists concerned that alcohol will thwart Confederate victory over the United States.

Sources: “What Woman Has Done and Should Do” (reprinted from the Religious Herald) and “Ladies Demolishing King Alcohol,” Biblical Recorder, March 26, 1862 (link); pictured is a modern image taken at a reenactment in 2006 at Ridley Creek State Park outside Philadelphia