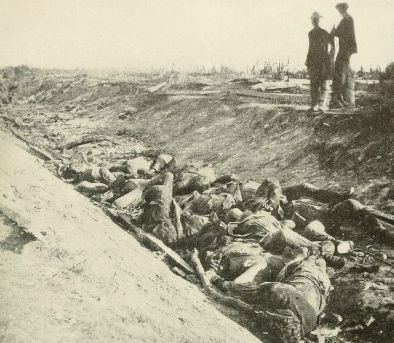 Confederate Dead in “Bloody Lane” after the Battle of Antietam

The day after the bloodiest day in the war, the sun dawns on an apocalyptic scene in and around a small Baptist church near Sharpsburg, Maryland.

Confederate Gen. Robert E. Lee’s invasion of Maryland has turned into a disaster of unimagined proportions. Some 12,000 soldiers lie dead or dying in a cornfield, as the Confederates ultimately suffer over 10,000 total deaths and the Union over 12,000, most dying from wounds. “In every building for miles around, surgeons, volunteers, farm families and strangers struggled to treat the wounded. Surgery was done on doors removed from their hinges; the survivors were laid on mattresses, tents, the bare ground.” The air is filled with agonizing screams and dying groans as medics from both sides attend to their wounded and Lee begins evacuating the Confederate wounded across the Potomac River.

Nothing had prepared Lee, only weeks ago so confident of his bold plan, for carnage on such a massive scale. Seemingly in shock, Lee, against the counsel of his advisors, braces for another attack from Union Gen. George B. McClellan, rather than retreating across the Potomac River. Mercifully for Lee, McClellan, ever cautious, for some unknown reason chooses not to throw 36,000 fresh Union troops at his disposal, against Lee. Only a few small skirmishes take place during the day, as the evacuation of the wounded continues.

As night falls, Lee finally issues the order to retreat. The Union has won a bloody, costly victory that reverses recent months of Confederate victories.

Thanks to slow long-distance communication of the era and the rural nature of much of the Confederacy, several days will pass before news of Lee’s enormous defeat is common knowledge in the South. Ironically, today has been set aside as a special day of celebration by Confederate president Jefferson Davis. Many Southern Baptist churches, in the spirit of Christian nationalism, happily follow Davis’s call for a national day of Thanksgiving to God, collectively offering thanks and praise to God for Confederate battlefield victories in recent months.

Davis’s proclamation for this day reads as follows:

To the People of the Confederate States:

Once more upon the plains of Manassas have our armies been blessed by the Lord of Hosts with a triumph over our enemies. It is my privilege to invite you once more to His footstool, not now in the garb of fasting and sorrow, but with joy and gladness, to render thanks for the great mercies received at His hand. A few months since, and our enemies poured forth their invading legions upon our soil. They laid waste our fields, polluted our altars and violated the sanctity of our homes. Around our capital they gathered their forces, and with boastful threats, claimed it as already their prize. The brave troops which rallied to its defense have extinguished these vain hopes, and, under the guidance of the same almighty hand, have scattered our enemies and driven them back in dismay.

Uniting these defeated forces and the various armies which had been ravaging our coasts with the army of invasion in Northern Virginia, our enemies have renewed their attempt to subjugate us at the very place where their first effort was defeated, and the vengeance of retributive justice has overtaken the entire host in a second and complete overthrow.To this signal success accorded to our arms in the East has been graciously added another equally brilliant in the West.

On the very day on which our forces were led to victory on the Plains of Manassas, in Virginia, the same Almighty arm assisted us to overcome our enemies at Richmond, in Kentucky. Thus, at one and the same time, have two great hostile armies been stricken down, and the wicked designs of their armies been set at naught.

In such circumstances, it is meet and right that, as a people, we should bow down in adoring thankfulness to that gracious God who has been our bulwark and defense, and to offer unto him the tribute of thanksgiving and praise. In his hand is the issue of all events, and to him should we, in an especial manner, ascribe the honor of this great deliverance.

Now, therefore, I, Jefferson Davis, President of the Confederate States, do issue this, my proclamation, setting apart Thursday, the 18th day of September inst., as a day of prayer and thanksgiving to Almighty God for the great mercies vouchsafed to our people, and more especially for the triumph of our arms at Richmond and Manassas; and I do hereby invite the people of the Confederate States to meet on that day at their respective places of public worship, and to unite in rendering thanks and praise to God for these great mercies, and to implore Him to conduct our country safely through the perils which surround us, to the final attainment of the blessings of peace and security.

Given under my hand and the seal of the Confederate States, at Richmond, this fourth day of September, A.D.1862.

This day of celebration soon gives way to days and weeks of great mourning. As will be the case again and again, sometimes only days or hours mark the time between joyous celebrations and deep agony in this monstrous conflict.