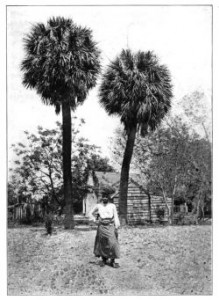 With gathering momentum, African slavery is losing ground following the Emancipation Proclamation. Nowhere is this more evident than within Union-controlled areas along the South Carolina coast. In the state where the first shot of the war was fired, and where prior to the war some of the richest men in the nation lived–all large plantation owners who derived their wealth from slavery–former slaves are learning the skills needed to live as free people.

Many coastal plantations are now in Union hands, and are thus property of the United States. Some Northern industrialists, seeing the potential for growing cotton on the plantations to supply northern factories, attempt to exploit the situation for their own benefit. Abolitionist missionaries working among the freedmen visualize something entirely different: turning the plantations over to freedmen, and teaching them how to work the land to support themselves.

Gen. Rufus Saxton, an abolitionist officer stationed in the Sea Islands and having the distinction of forming the first official regiment of slaves, catches the vision of the missionaries and secures plantation acreage for the land reform experiment.

Today missionary Laura Towne reports: “Hurrah! Jubilee! Lands are to set apart for the people so that they cannot be oppressed or driven to work for speculators, or ejected from their homesteads!”

Eventually, some 30,000 acres of seized land in the the Beaufort District is purchased, on generous terms, by freedmen. During the war years and in the months thereafter, much land once forcefully worked by enslaved blacks–to increase the wealth of their owners–is thus owned and tilled by the free will of freedmen.

Meanwhile, far to the west slavery is dealt yet another blow as Arizona–carved out of the Territory of New Mexico–is recognized as a new United States territory where slavery is disallowed.

The white planters’ dream, shared by Southern Baptist elites, of expanding African slavery westward and into other regions of the world in perpetuity is dimming with each passing day. And yet the war goes on as the Confederacy determinedly fights to preserve the institution of African slavery, the economic soul and the central identifying characteristic of the South.

Sources: John H. Tibbetts, “Emancipation Day: The Freed People of Port Royal,” Coastal Heritage, Volume 25, No. 1, Fall 2012 (link); “Laura Towne (1825-1901), PBS (link); “Letters and Diary of Laura M. Towne,” Daily Observations from the Civil War, including image (link); “The Organic Act of Arizona: An Act to Provide a Temporary Government for the Territory of Arizona, and for Other Purposes,” February 24, 1863, in The Compiled Laws of the Territory of Arizona, Including the Howell Code and the Session Laws from 1864 to 1871, Inclusive, p. 13 (link)