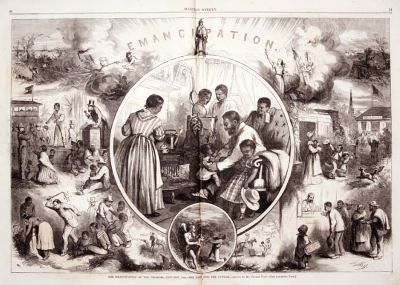 In the North, today’s edition of Harper’s Weekly features a celebrative illustration of U.S. President Abraham Lincoln‘s Emancipation Proclamation, drawn by Thomas Nast. A family of former slaves is pictured in the center, with a portrait of Lincoln hanging on the wall. The past is illustrated to the left, and a hopeful future is envisioned on the right, a future of education and wage jobs for freedmen. Below, Father Time holds a New Year baby who is breaking asunder the chains of slavery.

To Confederates, however, the potential future of freedom for African slaves as unleashed by the Emancipation Proclamation represents a nightmare scenario. Already, abolitionist forces are forcing havoc, destruction and injustice upon the formerly peaceful South, as this week’s North Carolina Baptists’ Biblical Recorder reveals in a vivid portrait of “outrages” visited upon Louisiana planters and their wives in recent months.

The following, from the pen of the wife of one of the most eminent Generals in the Confederate service, is a dark, but graphic portraiture of Yankee rule in Louisiana. It is to be hoped that Butler the perpetrator of so many wrongs and outrages will yet meet a just reward for his misdeeds:

Among the many Abolition raids to be recorded when the sad history of our civil war is written, none will disgrace its page more, or will stand out in blacker colors, than the recent one on the Lafourche, both for the vast amount of property destroyed and the insults offered to the ruined inhabitants.

The Bayou Lafourche, one of the mouths of the Mississippi, begins its course at the old French town of Donaldson, and flows seventy miles to the Gulf, passing through some of the most beautiful and flourishing parishes in Louisiana. The banks of the stream were thickly lined with magnificent sugar plantations, in a high state of cultivation, and very valuable for their rich, fertile lands, and for the large number of slaves engaged in working them. Most of these estates were managed by men incapable of bearing arms, or by the families of planters who were absent, engaged either in the arms or councils of the Confederacy. The ladies, like true Southern women and patriots, resided on the plantations, overlooked the labor of their negroes, saw to and relieved their wants, and kept them under perfect control, in a state of quietude and content. But soon the shock of war rudely broke in upon this fair scene, and destroyed it for years, if not forever.

On the 25th of October, a Federal force, four thousand strong, under the command of Brigadier General Weitzel, landed at Donaldson. and dividing in to two columns, marched down both sides of the bayou. As it is not proposed to write a military sketch, but rather the results of conquest, it suffices to say, that the Confederates, commanded by the gallant Mouton, greatly inferior in numbers and hastily organized, were forced to retire, and finally abandon the county.

Then began the horrors of the present system of warfare, revengefully adopted by the Lincoln Government, and only too effectually carried out by Butler and his officers. Since they have found it impossible to conquer a brave race by civilized means, the Abolitionists have determined to destroy their property–make a wild waste of their estates–strike a vital blow at the very source of Southern prosperity the slaves, and to free them not from feelings of false philanthropy–for which Europe mistakingly gives them credit–but for vengeance and the gratification of hatred.

As the federals advanced, the negroes on the plantations were incited to rebellion by the troops, were filled with a frenzy which they, poor wretches, imagined freedom; and dazzled by the brilliant promises made to them, they generally, in a body, abandoned their comfortable homes–forgot the care and benefits of years, seized the wagons, mules, horses, and even carriages, of their owners, robbed them of every transportable obstacle, and swelled by a drunken and disorderly rabble the triumphal march of the ruthless invader. Truly the Federal, General, when he beheld the vast crowd of his sable followers, must have fancied himself a conqueror of old, with his sooty captives from Africa.–Roll back the tide of years, and the picture presented was a fitting one for the barbarous days of the Roman Republic.

On reaching the pretty town of Thibodeaux, situated thirty-miles down the Lafourche, Gen. Weitzel ended his march and established his camp–and that camp, revolting sight! to any one possessed of even the ordinary feelings of humanity or decency. The negroes flocking into it from all parts of the adjacent country, soon raised the numbers to thousands. There they were seen of all ages, dressed in their holiday finery, with Yankee soldiers, (fit associates,) all mingled up in disgusting familiarity. Curtis’ army, so bitterly denounced by his own papers, could not have been in a state of greater confusion or demoralization. To make temporary shelters for themselves the negroes tore the fences from the road-side, roofs from adjoining houses, and covered them with matting and fine carpeting from the floors of their masters’ houses. Then, for a time, they revelled in their new and delusive dreams of a millennium that had come, the old inflated by the preaching of Abolitionists, the young charmed at being the companions and belles at the soldiers’ balls.

What was the condition of the unhappy ladies against whom Gen. Butler makes it his proud boast that he wages war? Some of them fled panic-stricken and frightened from their homes, leaving all their worldly effects behind them; others remained horrified spectators of the wreck of their estates, subjected to the insults and plunder of drunken troopers, and of the ungrateful race they had for years cared for and protected.

In most instances, out of hundreds of those not a faithful one remains to perform the menial services of the household, and those that a day before had been surrounded by health and comfort were left destitute. Arms of every kind were taken from the inhabitants, even to the pistols of the women, and they were thus left to the mercy of the negroes turned loose upon them. The sugar and grain crops were seized and sold by Gen. Butler’s agents, and a promise of compensation given to those who would take the oath of allegiance, and could prove their loyalty.

The slaves having all been declared free by a proclamation from Gen. Butler, the loyal planters were allowed to hire them at stated wages; but pleased with their life of vagary and idleness, few could be induced to work so long as food could be otherwise obtained; and in Lafourche country alone, the United States has twenty thousand negroes to clothe and feed, or to leave them to nakedness and starvation.

The last and bitterest insult to a Southern planter remains to be told. A negro regiment was placed to command in Lafourche when the white troops were removed. The slaves of that district were rapidly being organized to form another brigade, and the likeliest and most intelligent of the men were induced to enlist by the promise of a liberal bounty or of a farm of 190 acres on their master’s plantations.

Outrages of every kind were of frequent occurence. Planters, for attempting to protect themselves or their families from insult, were beaten and hand-cuffed by their former slaves and dragged by them before the Abolition authorities. There were yet darker deeds, where woman was the fearful victim. That more were not committed is due to the lingering feeling of respect and attachment still existing in the breast of the slave. But to those who know the negro character well, and the great danger of casting off all discipline and restraint, it needs not a prophetic eye to foresee the servile war so exultingly and fiendishly depicted by the abolition journals of the North. The exiles who go broken hearted and penniless wanderers from their once lovely homes on the banks of the Lafourche, shudder at the still more terrible fate that menaced the land there and elsewhere in beautiful, but God-forsaken Louisiana.

Mercy folds her wings and sighs farewell, wherever Butler has control.