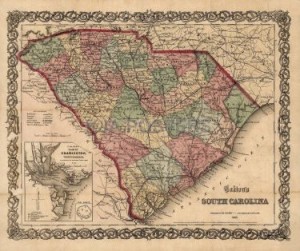 Today the South Carolina Baptist State Convention convenes at Darlington. Within the state which precipitated the war, the Southern Baptists (only white males attend the convention) present are fully supportive of the Confederacy. Today’s primary concern is the evangelization of the men who are fighting in the Confederate Army, in addition to meeting the needs of South Carolina Baptists in the service.

Delegates listen to a Report of the Colportage Board and take up a collection to support the distribution of Christian literature among soldiers.

The demand for effort in behalf of the spiritual wants of our soldiers has increased as the war has advanced.

Although there has, from the beginning, been a very marked interest on the part of a large proportion of our troops in everything pertaining to religion, still, if the attention shown by them then be compared with the concern evinced by them now, it will afford us the just ground of profound gratitude to God, that He has smiled upon the efforts which have been made to save the souls of the defenders of our country.

The growing interest, too, of our churches and people at home in this most needful work keeps pace with the increased demand for labor in the army, as is shown by their large and constantly increasing contributions. Though appeal after appeal has been made to the same churches and to the same brethren for the same object, and made in quick succession they have everywhere responded to every appeal and everywhere cheered us by their enlarged liberality, by their kind words of sympathy, and by their prayers for God’s blessings to rest upon our efforts and theirs. So that we are encouraged not only to continue the exertions already in made, but we are urged to enlarge them because God has blessed what has already been done by many conversions, and by the awakening of multitudes of others; and because He has opened the hearts of our people and given them a mind to devise liberal things for him.

We have had from the beginning of our labors in the army, these primary objects in view:

1. To put the “Word of God” into the hands of every South Carolina soldier, has been our constant effort; and though we have not confined our efforts to South Carolina soldiers exclusively, we have sought them out and endeavored to supply them specially, except where we have found troops from other States on our coast, in that case we have supplied all alike.  During the past year we have bought and received for distribution, seven thousand copies of the New Testament. We have made arrangements also for five thousand copies in addition to these.

2. To publish and circulate religious tracts, as the demand for them was made upon us, suited to the wants and circumstances of our troops, has appeared to the Board a matter of prime importance…. Fifty-two [tracts] in all [have been published since the last convention], and numbering two millions two hundred and eighty thousand pages. Added to this number are one million eight hundred thousand pages received from other sources, making as the total operations of the Board for the present year, four millions and eighty thousand pages.

We have also distributed a large number of valuable books given by brethren and friends of the enterprise, amounting to several hundred thousand pages.

To be added still to the above reading matter, we have distributed twenty thousand copies of the Confederate Baptist, equal in amount to seven hundred and forty-eight thousand pages of tracts.

3. Another primary end which the Board has always sought to accomplish, is the sending of Ministers of the Gospel among the troops; in this way, we have from beginning of our labors in the army, combined missions and colportage. So that we are enabled, at the same time that we place in their hands the Bible and the printed page, to give them also living ministry. It is to be regretted that the many interesting reports of brethren laboring in the employment of the Board are omitted from this report by its otherwise necessary length.

Conversions and baptisms are reported weekly. They tell us also of deep and wide religious awakenings, promising a still richer harvest in the future; they tell us of the joy with which the soldiers received the Bible, and of the wonderful influence for good exerted by tracts published by the Board.

1. Brother Carson says, in regard to the influence of these, “there never has been such a religious awakening in this regiment since its organization as at present. It has been gradually increasing for two months until it pervades almost the entire regiment. Tracts are greatly needed. I attribute much of the present revival to the influence of the tracts you furnished us.

2. Rev. W. E. Walters has been laboring in Virginia. He has found the demand for ministerial labor so great, in some cases and the laborers so few, that he has preached as many as five times a day, besides holding two other meetings for prayer. He reports the troops standing in the snow over their shoetops to hear the Gospel.

3. Rev. Tilman R. Gains, part of his time in Virginia and part in South Carolina.

5. Rev. James Huckins, in the Charleston hospitals and islands near, and along the coast.

6. Rev. Perry Hawkins, on the islands near Charleston and along the South Carolina coast, but now in Gen. Johnston’s army in Mississippi.

10. Rev. E. T. Winkler, hospitals in Charleston and troops in and near the city.

12. Rev. Christopher Nelson, among the sailors and sick in hospitals in Charleston.

While we have secured the services of the above named brethren for a longer or shorter time during the year, there is still a very great scarcity of ministers in the army. But we have received assurances from a number of pastors that they will give their service for two months during the Summer to the Board for this work. The number so offering, however, is not so large as we had hoped it would be.

17. Rev. J. A. Chambliss, of Sumter, will go during the coming week, under appointment of the Board, to Gen. Johnston’s army. Brother Chambliss’ church has set the praiseworthy example of giving their pastor for two months to this work — while they continue his salary.

PHYSICAL WANTS OF OUR SOLDIERS

The primary objects of the Board are those already stated, viz: “The circulation of the word of God” — the publication and distribution of religious reading matter, and the appointment and support of Ministers of the Gospel to preach to our troops.

But while these are our grand objects, funds have been placed in our hands from time to time, for the physical wants of the sick and wounded, which we have used as indicated. So that while we have pointed sinners to the Cross of Christ, and rejoice in the conviction that our brethren laboring to this end, will have many stars in their crowns of rejoicing in the great day; we have also moistened the parched lips of the dying, and given a cup of cold water to the toil-worn and fainting soldier as he returned bleeding from some hard contested battle-field, or lay upon his hard cot, away off in some hospital.

This part of our labor, though incidental and narrowly limited, has been a most grateful work and has opened the hearts of our soldiers to receive the Gospel at the hands of those who have ministered to their comfort.

Rev. James Huckins, of Charleston, has divided his efforts during the year, between the temporal and spiritual wants of the soldiers, and has greatly endeared himself to them. His services have been invaluable. He has collected mostly for the physical comforts of the soldiers, six thousand four hundred dollars and sixty-seven cents. And Brother E. T. Winkler who has been laboring a time, has collected one thousand six hundred and twenty-two dollars and seventy-five cents, which he has expended for the physical wants of the soldiers.

Source: Minutes Of The 43d And 44th Anniversaries Of The State Convention Of The Baptist Denomination In S. C., Held At Darlington, July 24th To 27th, 1863 (link)