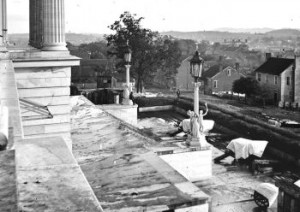 Nashville, occupied by the United States Army, has become a significant Union supply and medical center in the South. All the Baptist churches in the city have been appropriated by federal troops, and many, including Second Baptist Church, are serving as hospitals. Known as the “Prison Hospital,” it houses both Union and Confederate prisoners, the former guilty of desertion, derelict or other minor offenses.

The Prison Hospital is not numbered; it is located in the Second Baptist (Dr. R. Ford’s) Church, on Cherry street, beyond South Union, a few hundred yards South of the Howard High School. There are two wards in the building, both large rooms, and both above ground, well lighted and ventilated, and very clean and comfortable, the hospital being well stocked with everything needful for the comfort of the patients. Indeed, in this respect we think it excels many others, but we may be mistaken as in this hospital we find more seriously wounded men than in other, and the various modern contrivances for easing of pain and relieving the discomforts of the bedfast, many have come more prominently before our eye.

The interesting features in this hospital, to us, was the great care and attention bestowed upon the patients — Confederates and Federals alike — who are mixed up with each other most admirably. Side by side the Federal and Confederate soldier eat, and sleep, and chat, and play, and comfort each other, and nurse each other, with that care and attention, shared heart-felt sympathy, which are always to be found prominently [in the] heart of the soldier. This hospital is not as some suppose, exclusively for Confederate prisoners, but for all military prisoners. All the Federals, we believe, have been guilty of mere petty offences, such as being out with a pass, exceeding by a few hours the limit of their leave of absence, attempting to break from the guard, and such like. The kind and affectionate manner in which each patient is addressed by the Surgeon in Charge as well as other officers, and the confidence and great respect which the patients entertain for them, is very striking and truly gratifying to the sympathizer with human sufferings. And here, indeed, is room for sympathy. Ghastly wounds of all descriptions are visible in every direction. Here are several who lost an arm, amputated close to the shoulder; many others a leg; many whose bones have become again unified but leaving one limb much shorter than the other; some deformities; some having lost an eye. Our attention was called to one interesting case, where a Confederate was struck by a minie ball on the second finger of the right hand, which was broken, and the ball lodged in the fleshy part between the thumb and index finger, a portion of the ball being cut off by coming in contact with his musket, and entering his right eye, which he has lost, and a buckshot entering his neck, and lodged there, and where it remains, just under the skin, but causing him no pain or uneasiness.

Another interesting case is that of an intelligent little boy — a mere child, — pretty and delicate, not yet fifteen years old, named John Taylor, of Chattanooga. He was wounded and taken prisoner some time ago, and is now doing very well. He seems to be quite at home, but would much like to obtain permission to stroll about town a little every fine day until he is well enough to be exchanged [sic].

Capt. King, of Louisiana, is also here, badly wounded in the right thigh. The Surgeon informed us that he has suffered severely, but uncomplainingly, for a long time, and several times feared he would lose him; but is now doing well, and likely to recover.

All inmates of this hospital are received from Col. Martin, the Provost Marshal, and to him returned or accounted for.

Among the other inmates were two lunatics, one of whom was sent to the Lunatic Asylum while we were at the hospital; the other is the one who was formerly in the Penitentiary — a quiet, inoffensive man, who sits in one position all day, eats well, never talks, sleeps well, and takes not the slightest notice of any person or thing. The one who was sent away urgently requested our company to town, and insisted on getting himself ready immediately.

There are many other interesting cases here, Which we may allude to hereafter, in another chapter. For the present we must concern ourselves to a statement of a few general facts connected with the hospital.

The following are the names of the officers of the Prison Hospital:

There are thirty men detailed to guard this hospital under Sergeant McFarland. Six nurses, three cooks, six colored females, and six colored males are employed. There are in the building, for patients, 100 iron cots, 25 of which were occupied on the night of the 19th, but eleven of the Confederates were removed on the 20th, with a view to an early exchange.

They is no regular chaplain belonging to this hospital, but Mr. Poucher visits the patients occasionally, and administers religious consolations to such as desire it. There are not regular religious services. The Sanitary Commission has furnished books on several occasions for the use of the inmates, and the Surgeon informs us that the patients feel grateful to MR. Crawford for his kindness in this respect.

The bath-room contains only one tub, but that proves sufficient under existing circumstances, there being few able to avail themselves of the luxury of sporting in a large and well filled bath tub. Dr. Hickman encourages a desire to bathe frequently.

For amusement and pastimes, chess, checkers, dominoes, and, we presume, a social game at euchre, are indulged, beside reading and writing.

The officers are on the first floor at the West end of the building; and in a small building in the rear, are the laundry and the room for cooking the delicacies for those unable to bear hospital fare with convalescents. The kitchen is on the north side of the building, and the dining room is a very comfortable one, in which meals are served to guards and convalescents at 7, 12, and 6 o’clock.

The Commissary is abundantly stocked and in addition to the ordinary supply furnished by government, Dr. Hickman informs us that he ins indebted to Dr. Reed and Mr. Robinson, of the Sanitary Commission, for liberal grants from that organization. The Dispensary and Linen room are also abundantly stocked with everything needful, or likely to be needed.

Good order, cleanliness, and quiet, prevail throughout this establishment, and the intimacy and familiarity existing between doctors and patients, betokens a confidence and good understanding between all parties.

The friends of Sergeant McFarland will regret to learn that he is very sick, and has been for some time. He is recovering, however, and hopes soon to be able for active duty.