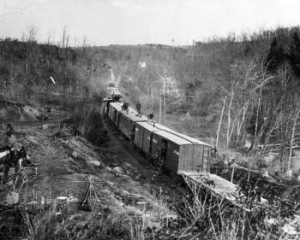 Two minor battles take place today, one in which the Union emerges victorious, while the Confederacy triumphs in the other. Like many other clashes this year of no direct significance to the outcome of the war, the impact of these two battles is localized, albeit reflecting important dynamics of the war.

The Battle of Droop Mountain, the war’s last significant battle in West Virginia, is fought over a railroad. The Virginia and Tennessee Railroad, connecting Richmond and Chattanooga, is a key supply, food and troop movement route for the Confederate Army. U.S. Brigadier General William W. Averell leads a second federal attempt to destroy the railroad at Salem, Virginia, near the West Virginia state line. Once again, his advance is blocked by Confederate Brigadier General John Echols. Although the federals win the battle, Averell’s army is hampered by captured prisoners and confiscated livestock. Unable to advance to Salem, the federals return to their headquarters in Beverly, West Virginia. Frustrated, Averell bides his time, waiting for yet a third strike at the railroad.

A second battle takes place today further to the South in and around the town of Rogersville, Tennessee. There, Confederate forces surprise unprepared Union forces and recapture the town from the federals. Again, a railroad is key to the fighting, as Confederate forces capture a large cache of Union supplies from the railroad storehouses at Rogersville.

Both battles underscore the importance of railroads in this third year of the war.

The Confederate strategy, at least in the minds of some leaders, has evolved into persevering longer than the United States is willing to do so, forcing the Union to sue for peace. Parallel to this strategy is a revival within the Confederate Army, complete with the hope that victory over spiritual darkness will help the nation overcome the dark clouds of battlefield losses.

Army chaplains do their part. Today’s Georgia Baptist Christian Index publishes a letter from an army chaplain in General Robert E. Lee‘s army … who refers to the importance of railroads.

Dear Bro. Boykin–Several months have passed since I wrote you my last letter. Our army then were encamped quietly around Fredericksburg, enjoying a precious season of grace from the “Giver of all good.” Since that time, our movements will form an important chapter in the history of this great struggle. The weary march into the enemy’s country, under the scortching rays of a summer’s sun; the great battle of Gettysburg, where so many brave men gave their lives as an offering on the altar of liberty; the painful retreat to Virginia, will be the theme of many fire-side conversations in days to come. It cost the South many of her bravest and best sons.

After our return to camps, near Orange C. H. [Orange Court House, Orange County, Va.], the work of Grace commenced afresh with greater power than was enjoyed in the Spring. Hundreds of wayward transgressors are now rejoicing in the pardoning love of Jesus. The chaplains in our brigade held every day services in the forenoon for the benefit of the brigade; and at night we held prayer meetings for the benefit of our regiments. The prayer meetings were pre-eminently successful. Every night we had renewed evidence of the deep solicitude which generally pervaded the minds and hearts of the soldiers. Scores would come to us asking earnestly an interest in our prayers. The invitation to unite with the people of God was almost without exception, accepted by the willing, rejoicing converts. Nearly forty converts from my regiment have united with the various denominations, and a deeper work of Grace has been enjoyed in the 35th Ga. Regt., than in mine. The 49th and 14th Ga. Regiments have likewise enjoyed a precious season. These meetings continued in their interest, until our recent advance upon the enemy. We will begin again, when a favorable opportunity permits.

You have heard before this, our advance and its results–the enemy driven away without a general battle. God be praised for his goodness to us. We tore up the Alexandria and Orange R. R. for miles, and are now encamped in a beautiful grove on the South side of the Rappahannock river. The prevailing opinion among us is, that we will shortly reinforce the army of the West. I know not the plans of the Administration. The country north of the Rappahannock, is a desolate waste. The heart sickens in beholding the ruins of this beautiful and once prosperous country; and the mind is impressed with the desolation in store for us, if we fail in this great struggle. God help us, is my prayer. Amen.

P. S.–The Index is a great favorite in camp. I know this from the eagerness which is manifest in asking for it. I trust you will continue to favor us with a weekly package.