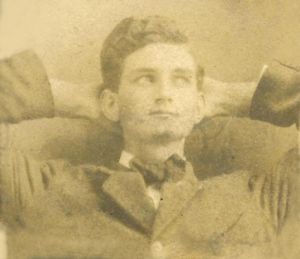 Inevitably, the Confederates defeat the over-matched federals, capturing the fort. The overwhelming defeat serves as a conduit for the anger that many Confederate soldiers have for blacks serving in Union uniforms. In what becomes a controversial episode, the rebels target black soldiers and effectively massacre them in the “Fort Pillow Massacre.” Only 62 black soldiers survive with their lives intact. A mere fourteen rebels are killed in the fighting.

Among the Confederate troops is Kentucky native Melville Buckler Peterson (1834-1910), a seminary-trained Baptist who was operating mercantile business in Hodgenville prior to the war. Many other of Forrest’s troops are also Baptists, as are many of the Union defenders, especially among the U.S. Colored Troops.

Following the victory and massacre, Forrest’s rebels withdraw within 24 hours (accounts of the timing of the withdrawal vary), their mission of temporarily disrupting local Union operations in the area accomplished.

Acting Master William Ferguson, commanding officer of U.S.S. Silver Cloud, a vessel that arrived at the fort on the 13th, offers an eye-witness account of what he saw:

We found about 70 wounded men in the fort and around it, and buried, I should think, 150 bodies. All the buildings around the fort and the tents and huts in the fort had been burned by the rebels, and among the embers the charred remains of numbers of our soldiers who had suffered a terrible death in the flames could be seen.
All the wounded who had strength enough to speak agreed that after the fort was taken an indiscriminate slaughter of our troops was carried on by the enemy with a furious and vindictive savageness which was never equaled by the most merciless of the Indian tribes. Around on every side horrible testimony to the truth of this statement could be seen. Bodies with gaping wounds, some bayoneted through the eyes, some with skulls beaten through, others with hideous wounds as if their bowels had been ripped open with bowie-knives, plainly told that but little quarter was shown to our troops. Strewn from the fort to the river bank, in the ravines and hollows, behind logs and under the brush where they had crept for protection from the assassins who pursued them, we found bodies bayoneted, beaten, and shot to death, showing how cold-blooded and persistent was the slaughter of our unfortunate troops.
Of course, when a work is carried by assault there will always be more or less bloodshed, even when all resistance has ceased; but here there were unmistakable evidences of a massacre carried on long after any resistance could have been offered, with a cold-blooded barbarity and perseverance which nothing can palliate.
As near as I can learn, there were about 500 men in the fort when it was stormed. I received about 100 men, including the wounded and those I took on board before the flag of truce was sent in. The rebels, I learned, had few prisoners; so that at least 300 of our troops must have been killed in this affair.

Temporary obstruction of Union activities aside, this particular Confederate victory proves to have long-term repercussions for the South at large as the Fort Pillow Massacre becomes a Union rallying cry, serving to steel the resolve of the United States soldiery and public in defeating the Confederacy.

After the war, Peterson marries Mary Etta Miller of Hardin County and the couple settle in LaRue County, Kentucky, raising five children to adulthood. He becomes a medical doctor and, while maintaining his medical practice, eventually embraces a call to the ministry that he had resisted for many years. In 1888 Peterson is ordained by the South Fork Baptist Church in Hodgenville and becomes a bivocational preacher.

It is unclear as to whether Peterson ever speaks of the Fort Pillow Massacre. Regardless, Peterson, like many other Baptist preachers who are veterans of the war, carries within him the mental and emotional trauma that comes from the killing of other human beings.