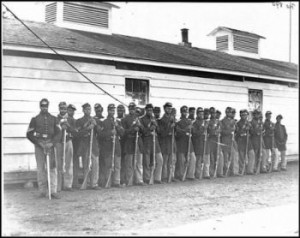 News of the Confederate massacre of black Union soldiers at Fort Pillow is spreading like wildfire throughout the North. As the public demands justice, famed black abolitionist Frederick Douglass today addresses a crowd assembled at the Twelfth Baptist Church in New York City.

Expressing hope that Congress is finally committed to providing fair pay to black soldiers, Douglass angrily denounces the massacre of two days earlier, declaring that “This massacre will materially contribute to a repentant feeling throughout the nation towards the long persecuted colored American.”

Meanwhile, in Philadelphia, Lizzie Marchand watches a “regiment of colored troops passing the house.” A young lady enrolled in a Baptist boarding school in the city, Marchand attends the city’s Calvary Baptist Church. She watches the procession filing by her house, later declaring, “They were a fine looking set of men, if such a name can be applied to such a collection of individuals.”

In the months ahead, Marchand volunteers her time in support of the war effort, including at the United States Sanitary Commission’s Great Fair held in Philadelphia during the month of June.

At dusk and far to the west the Union wins yet another minor skirmish this month. As a part of the ongoing Red River Campaign, the skirmish at White Oak Creek in Arkansas presages the Union’s capture of the town of Camden the following day. Militarily and politically, the Union is making great strides in the state. In response to President Abraham Lincoln‘s reconstruction efforts, Arkansas Unionists have already formed a loyalist government and  passed a constitution that outlaws slavery.

Throughout the theaters of war in which the Union military is engaged, tens of thousands of black Union soldiers fighting, marching and training today are of the hope and belief that the sun is setting on black slavery.