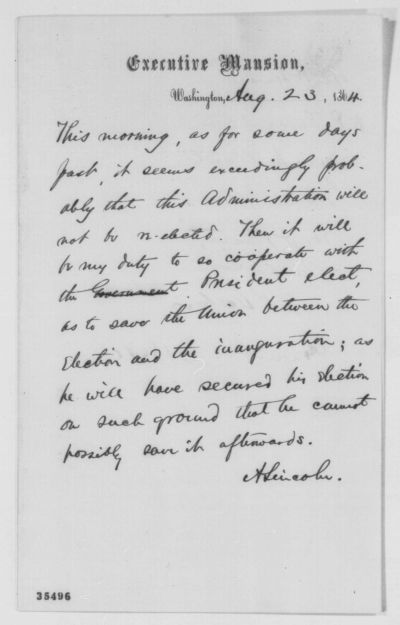 Against the backdrop of the Union’s inability, to this point, to capture either Richmond or Atlanta, and the attendant restlessness among many Northerners, U.S. President Abraham Lincoln recognizes the growing possibility of defeat in the upcoming November elections.

The Democratic platform is one of immediate peace and the end of emancipation, and many Northerners seem to approve of such. To further their chances in the November presidential election, the Democrat’s presidential candidate is well-known Union General George B. McClellan.

McClellan was earlier relieved of his command by Lincoln, who was unappreciative of his unsuccessful, overly-cautious military leadership. In so doing, Lincoln realized that he had made a political enemy of the general. Now, McClellan is determined to defeat Lincoln and the Republican Party.

In a brief and private memo penned to his Cabinet this day, Lincoln concedes that George B. McClellan may be elected as president, but makes it clear that his commitment is to saving the Union, no matter the electoral outcome.

Is Lincoln worrying needlessly? Only time will tell.

This morning, as for some days past, it seems exceedingly probable that this Administration will not be re-elected. Then it will by my duty to so cooperate with the Government President elect, as to save the Union between the Election and the inauguration; as he will have secured his election on such ground that he cannot possibly save it afterwards.

Lincoln is not the only one who feels he is on the ropes. J. D. Hufham, editor of the North Carolina Baptist Biblical Recorder, recently stepped out in faith and increased the size of his newspaper. Now, he rhetorically asks of his readers, “Shall we Succeed?”

The Recorder, in its old proportions, has been before its patrons for two weeks. It remains for them to decide whether this arrangement shall be permanent. Since it was made, the price of printing paper has been increased, and our printers have asked for higher wages. A still greater increase in the cost of publication may be expected; but we believe the Recorder can easily be kept on a whole sheet. We desire that it shall be, as it not only presents a better appearance, but enables us to furnish a greater quantity and variety of reading matter, and to fill up all the requisites of a family journal. But we can not do this without the aid and co-operation of our brethren throughout the State. Nor can we wait many weeks for a response. The outlay is so large that we shall be compelled soon to return to a half sheet without prompt and efficient action on the part of our patrons. Shall we have it? We hope, we believe we shall. A spirit of liberality, similar to that which has been manifested towards some of our religious exchanges, would settle the question at once. The Advocate, of this city, announces the reception of $1000 from one man to furnish the paper to soldiers. The Central Presbyterian has received, from a lady, $2000 for a similar purpose. These instances show what can be done when there is a will. Will not our readers take this matter in hand at once and labor to extend our circulation both at home and in the army?