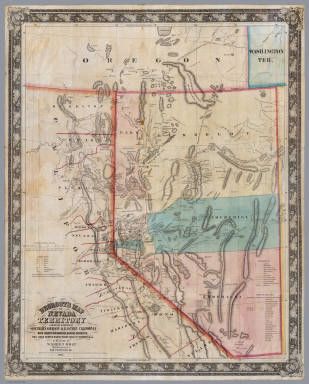 In Washington, D.C. today U. S. Senator John B. Henderson of Missouri submits a joint resolution for a constitutional amendment abolishing slavery.

Although the legislation does not pass this year, Henderson’s resolution signifies the momentum of the movement toward the enactment of the Thirteenth Amendment and the abolishing of slavery on February 1, 1865.

Meanwhile, far to the west, free black Baptists of Virginia City, Nevada Territory, having established the frontier town’s First Baptist Church, this month are the beneficiaries of a gift from the San Francisco chapter of the Daughters of Naomi, a black women’s ministry within the African Methodist Episcopal Church.

A newspaper account of the event indicates the solemnity of the occasion in a western territory established a mere three years earlier:

Proceedings of the presentation of a munificent donation, consisting of a magnificent bound pulpit Bible, and one dozen splendid bound hymn books, from the association of the Daughters of Naomi, of the city of San Francisco. Presented by them to the First Baptist Church, in Virginia City, N. T. Accepted in behalf of the Church on Sunday evening, January 10th, by Dr. W.,H. C. Stephenson, and presented by Miss Christianna Taylor, the representative for the Daughters of Naomi. The Rev. Charles Satchell made the following introductory remarks:

Brethren and Sisters—lt is my pleasure to introduce to you Miss Christianna Taylor, the representative of the Daughters of Naomi, of San Francisco. They hearing of your laudable efforts, to erect a temple for the worship of the Most High God in this place, availed themselves of the opportunity to present to you, through their appointed representative, a magnificent Bible and hymn books, as a token of their approbation and furtherance of your efforts. We take great pleasure in saying that no gift could be more praiseworthy, none more highly appreciated. We attach great importance to the gifts selected, it being the first manifestation since their organization. Though not strictly a religious Society, yet they embody, in this selection, the elements of Christian virtues. This inspired idea, in this time of need, should be chronicled as a matter of reference upon the records of this Church, that our children in future time, by reference to the record, may learn to imitate their virtues and noble example. We predict for that Society a prosperous future, and in the future should their circumstances require our aid, we would most cheerfully reciprocate their disinterested kindness, as the best evidence of our gratitude and thanks.

Miss Taylor then addressed the company:

Ladies and Gentlemen—ln behalf of the Ladies’ Benevolent Association of San Francisco, known as the Daughters of Naomi—who, in desiring to help on the blessed word of our dear Savior wherever it might be preached, or wherever a few of his humble followers lift up their voices in prayer and supplication to him, whether in the valleys, upon the plains, or on the heights of the Sierra Nevada—l, in behalf of those ladies, present to the members of the First Baptist Church (Virginia City, N. T.,) these books, hoping that within they may find truths which will assist them in laying broad and deep the foundation of their future prosperity. Knowing the truth of the old adage, which says, ” Righteousness exalted a nation, but sin is the reproach of any people,” vve should, in this new epoch of our lives, first seek his righteousness and his wisdom, for we are told that knowledge is power. This precious Word of God, this Bible, is the corner-stone, this edifice erected to His honor, and for Him in a young but growing Territory, will, in after ages, become a safeguard, a refuge and a haven to a struggling people, who, but a few days ago, through the assistance of an Omnipotent God, have just burst oft’ the shackles of oppression and slavery. My friends, in giving you this, our humble but best of gifts, we give you that which will be an ornament to you, both temporally and spiritually, that which will fit you for time and eternity, hoping that this Church and people may always be an honor to the community among which they dwell, and that our gifts may be to them as an oasis found in the desert by a weary traveler.

Dr. Stephenson replied in behalf of the Church, as follows:

Madam—The Christian asssociation of which I am a humble member, has delegated to me the responsible and no less pleasing duty of accepting this token of goodwill, friendship and esteem in their behalf, from the Daughters of Naomi, and of responding to them, through you, their chosen, and to us most acceptable representative. It will not be out of my place, at this time and on this occasion, to pay that compliment to your virtues which is an adornment to your sex in every intelligent and enlightened community. Since you have made this side of the Sierra Nevadas your home, we have not been unmindful of the course that you have pursued in the walks of life. And though, as in all new countries, you have been surrounded by temptations and allurements of the most attractive character, you have stood steadfast to your integrity and maintained, unblemished and beyond reproach, your honor; more than this, whether friend or foe has been laid by disease, through the dispensation of a kind Providence, prostrate, you have, in the vigils of the night, watched over them, and done all in your power to elevate their misery. Knowing these facts, the Daughters of Naomi, in selecting you as their representative, have made it doubly acceptable to us. You are well aware that the language of the lips is but a poor medium to convey the deep emotions of the heart. You will please remark to-day to the Daughters of Naomi these few simple words: ” Our thanks, our gratitude and enduring love, principles engrafted in our hearts and thoughts in the volume before us.”

They too are engaged in a great, good and glorious work, in attending to the sick and soothing the dying. May God bless them. He will bless them. He has promised to, in the word you have just presented. In an unostentatious manner they are carrying out the principles of the good Samaritan; may we all be so guided by the counsels and precepts contained in the best of books, that, when mortality shall crumble to dust, and mingle with its mother earth, our immortality, when it shall stand before the tribunal door of Jehovah, may hear the welcome sound—Well done, good and faithful servant, thou has been faithful over a few things, I will make you ruler over many. Enter thou into the joys of the Lord ; may we all be so unspeakably happy as to pass over the portals that lead into celestial happiness, and bask in smiles of our Immanuel, through the endless ages of enduring peace.

The following resolutions were offered by the Rev. Charles Satchell, and after a few remarks from him, in acknowledgment of the munificence of the Daughters of Naomi, were unanimously adopted.

Resolved, That the proceedings of this meetings be placed upon the Church record.

Resolved, That a copy of these proceedings be transmitted to the Daughters of Naomi.

Resolved, That a copy be sent to the Pacific Appeal for publishment.

After the singing of a hymn, the meeting was dismissed by benediction from the Rev. Charles Satchell.

The Sierra Nevada mountain range, while imposing, is no hindrance to the sisterhood felt among free black women of the American West.

In October 1864 Nevada Territory is admitted to the Union as the state of Nevada.