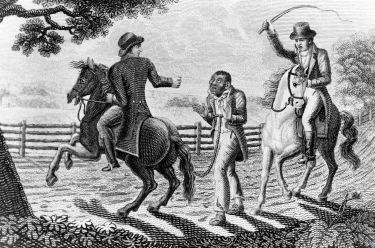 In tandem with the plunging prospects of the Confederate States of America are Southern whites’ escalating condemnations of the evil, abolitionist United States.

To be certain, Southern whites even prior to the war pinned the blame for secession on Northern abolitionists while proudly proclaiming the South’s determination to fight with all their might for the preservation of African slavery, an institution blessed by the Bible and willed by God.

Now, the institution of African slavery–all along recognized by citizens North and South as the cause of the war–is under unprecedented strain as tens of thousands of slaves in the past year have fled to freedom behind Union lines or been liberated by advancing Union military forces. Confederate leaders and elites, as well as Baptist divines, yet maintain that slaves are happy and fulfilled in bondage, even as their words increasingly ring hollow in the Deep South.

The early weeks of 1864 witness a Confederacy precariously perched upon the precipice of a yawning chasm. Southern society, culture and religion are all structured upon African slavery, as is the industry and economy of the South. Should the peculiar institution collapse, the fortunes of the white South would fall into ruins. In the view of legions of Southern Baptist newspaper editorials and commentaries (themselves reflections of the larger thinking of white Confederate elites) of the past three years, the absence of African slavery would mean the enslavement of whites. The obvious exaggeration of the argument has not in the least hindered the shrillness with which it has been incessantly hammered home in periodicals and speeches throughout the Confederacy.

It is within the context of this war-long parade of trumped up but emotional warnings that this week’s Virginia Baptist Religious Herald publishes a ringing condemnation of abolitionism as “the Final Antichrist.”

It is the remark of [Richard Chenevix] Trench [Irish Anglican archbishop and poet] that “the last and subtlest form of all idolatry, is the deification and worship of man, and, worst of all, of man in all which constitutes his shame no less than his glory.” He maintains that “the final Antichrist” will be “a man-god, a man that has lifted up himself, and been lifted up by the consent of his fellows, to this blasphemous height.” He alleges, moreover, that “they must be blind indeed to the moral signs of the times who cannot perceive this mystery of iniquity, the last and the crowning one, already working; this world-wide conspiracy, the same of which David spake in the second Psalm, spreading through an apostate Christendom which is ripening more and more from an open revolt from its Lord.”

Now, assuming the truth of this view, where shall we find, in “apostate Christendom,” the most palpable traces of “the new gospel, ‘Man is God,’ which is seeking to supplant the old, ‘God is man!'” Are not these traces specially evident in the humanitarianism of the age! Is not the true character of this humanitarianism betrayed by the fact, that it gains currency, for the most part, in those countries, and those classes of society in all countries, in which the divinity of Christ, and even the inspiration of the Scriptures, pass into the form of nominal beliefs, or encounter rejection as exploded superstition?

This seems obvious. And then, does not humanitarianism–this gem of the last and crowning mystery of iniquity–everywhere voice itself in anti-slaveryism! Is not abolitionism, therefore, (to say no more,) the point of transition, for the present age, to that “apotheosis of man”–first, of man’s nature, next of individual man–which shall constitute “the final Antichrist!” And in fighting against Abolitionism are we not fighting against “the final Antichrist,”–at least in the shape of the principle which goes before and prepares the way for him! Have we no need to be a purified people, that we may worthily wage such a war? Should not faith and prayer rank among our chosen weapons? Should we not seek to be “full of power, and of judgment, and of might, through the Spirit of the Lord?” Will not God eventually make bare His arm on our behalf, though He long subjects us to the fiery purgation of battle and blockade, fitting us for the position of triumphant championship to the cause which is more His own than ours?

Confirmation of these views is furnished by the speech of Charles Sumner [Massachusetts senator, Radical Republican, and leading abolitionist], last year, which the New York Independent styled a “splendid indictment against England and France, pronounced at the bar of the nations!” Those who have read that speech will remember how intensely and acrimoniously “Abolitionist” it was; how boldly it avowed emancipation to be the purpose of the war against the South; how Northern sympathy for “the brave and beautiful black” was pictured as the sublime mission of the nation that invades us–their indefeasible title to the applause of all other nations. Looking forward to the time when the South shall be subdued, and the United States “enfranchised” from all bonds of slavery, Sumner tells his hearers that, in this millennium of Faneuil Hall, “our country will stand forth to assert the dignity of man, and wherever any member of the Human Family is to be succored, there its voice will reach as the voice of Cromwell reached across France even to the persecuted mountaineers of the Alps.” Is not this the prelude to the apotheosis of our nature? Sumner predicts, also, that the (Abolition) Republic “can know no bounds to its empire over a willing world:” and if we paint to ourselves, rising out of the tides of those times, the great Military Despot who shall grasp the sceptre of Republican domination, is not the image of the coming “man-god,” the “final Antichrist,” before us?

Can the pro-slavery rhetoric rise to greater heights (or descend to lower depths) than that of portraying abolitionism as “the final Antichrist?” Is such language an indicator of the desperation of elite Southern Baptists to preserve African slavery and white supremacy, both held as sacred tenets? Does the playing of the Antichrist card portend the inevitable outcome of the war over slavery?