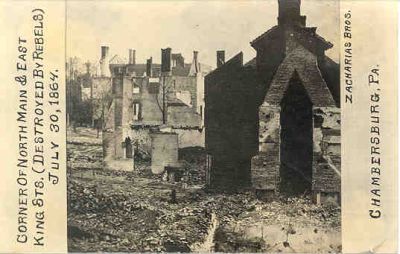 Sunday morning dawns on the smoldering ruins of Chambersburg, Pennsylvania, the town having been burned by Rebels the day previous. Some 550 structures are damaged or destroyed. Sunday services are canceled.

While the destruction is great, the Confederate raiders, led by General John McCausland, left behind only one dead, an elderly African American. At least five Confederate soldiers, on the other hand, had lost their lives in the brief but effective raid upon the city.

The daring raid into Pennsylvania signals that the Confederate military is yet able to strike on enemy turf, albeit on a small, lightning-quick scale. The South can only hope that such incursions will help raise, in an election year, the temperature of political opposition against U.S. President Abraham Lincoln‘s war policies and lead to a peace settlement with the Confederate States. But in order for this scenario to be realized, the South’s armies will have to keep superior Union military forces from breaking through the defenses at Petersburg and Atlanta. The odds of accomplishing just that seem less and less likely.

Special Sunday services are the order of the day, as on the surface religious life carries on as usual in the heart of the ever-shrinking Confederacy.

The Charity Sermon was preached at 11 A. M., by Rev. J. 0. B. Dargan, from Psalm lxvii; 1, 2, after which a collection was taken up for our Colportage Board, amounting to $551, which was afterwards increased to $1463. At the same hour Rev. T. W. Rambaut preached in the Church — in the afternoon Rev. J. S. Murray preached in the Gilliard Chapel, and Rev. Furman in the Baptist Church at night.