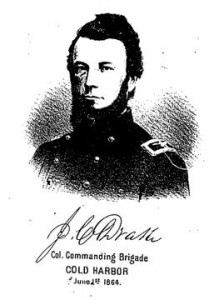 The 112th New York, comprised of men from Chautauqua and Cattaraugus counties, was organized in September 1862.

The 112th New York is now commanded by Colonel Jeremiah C. Drake, formerly pastor of the Westfield Baptist Church, New York. Born in 1824 and a native of Herkimer County, at the age of 16 Drake felt called to the ministry and joined the local Baptist church. A graduate of New York Baptist’s Madison University, he attended that institution under the chancellorship of Ira Harris, a leading American (Northern) Baptist and later U.S. Senator from New York. Afterwards Drake graduated from Rochester University, beginning his ministerial career in 1852 when he was ordained to the pastorate of the Churchville Baptist Church in Monroe County. The pastorate of the Westfield congregation was Drake’s third charge.

His patriotism stirred by the war against the Rebellion, Drake, lacking any military experience, volunteered for service with the 49th New York in the fall of 1861. Despite his lack of experience, Drake was elected captain and chosen to head up the 49th’s Company C. In this capacity he demonstrated unusual leadership skills, particularly during Gen. George C. McClellan‘s Peninsular Campaign in early 1862.

Drake, previously highly thought of by the citizens of Westfield, was heralded by locals as a hero. Upon learning of Drake’s promotion to the command of the 112th, residents of Westfield and Mayville displayed their support of the former pastor by providing him with a steed fitting of his new position. As reported by a local newspaper:

It is a coal black stallion, purchased of Mr. Hiram Barnes at a cost of $500. It is one of the finest horses we ever saw, and we hesitate not to say, that the gallant Colonel will never cause the donors to blush for him. No braver or better man, in our opinion, could be found to lead our sons and brothers to battle and to glory, than Col. J.C. Drake.

Under Drake’s leadership, the 112th in 1863 served duty in Virginia and then South Carolina. Arriving in South Carolina in August, the New York regiment was stationed on Folly Island as part of a growing offensive against the Confederate port city of Charleston. While Union cannon and long guns on Folly and Morris islands guarded the entrances and occasionally fired upon the city, the soldiers of the 112th had ample time to stroll the beaches and collect shells, many of which found their way to families back home.

Following many months of relative leisure, riddled nonetheless with clouds of sand fleas and mosquitoes, the 112th was ordered further southward to Florida in February 1864. Landing at Jacksonville, they spent weeks digging pits and entrenchments around the city that was but a shadow of its former self, having been gutted by fires set by retreating rebels upon the city’s occupation by the federals.

Yet despite the jagged outlines of the city and the hard manual labor, officers and soldiers of the 112th found much to like about Jacksonville. One officer observed: The weather here now is similar to June in Chautauqua. Oranges are plenty; peaches and cherries grow freely.

One private noted: Florida as far as I have seen it I like. It is pleasant and the air is pure and agreeable to me. It is warm through the day, cool through the night. I have got so climated to the South and to soldiering that the heat or cold does not trouble me.

The relatively easy days in Florida, however, prove short lived. In April the Jacksonville contingent of the 112th was ordered back to Virginia as part of the war department’s effort to defeat Confederate Gen. Robert E. Lee‘s Army of Northern Virginia. Colonel Drake was assigned as commander of the 2nd Brigade of the Army of the James. The following month, his brigade was transferred to the Army of the Potomac.

Yesterday, June 1, 1864, marked the second day of the Battle of Cold Harbor, some ten miles northeast of the Confederate capital of Richmond, Virginia. Drake with raised saber led his brigade in a battlefield charge. Exposed to the enemy, the colonel was hit by enemy fire. Mortally wounded, he was rushed to the field hospital. He lived through the night, only to succumb to death as the sun rises early this morning.

Drake’s last message is as follows:

Give my love to my wife. Tell me friends and tell my countrymen I die a brave man, I die at peace with the world, and I trust at peace with my God.

As to the Battle of Cold Harbor, the remainder of this day witnesses a pause on the part of the Union Army in an effort to consolidate firepower, while Confederate Gen. Robert E. Lee takes advantage of the time to construct defensive works. The delay in attacking the rebel army will prove to be the undoing of federal forces in this battle that lasts for many more days.