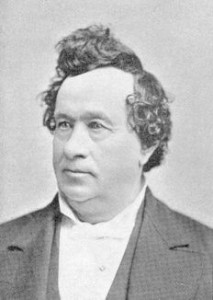 This month Osgood Church Wheeler is appointed secretary and manager of the United States Sanitary Commission for the Pacific Coast. He joins many other Northern Baptist ministers serving in U.S. agencies that assist freedmen and soldiers.

A native of Wolcott (Butler), Wayne County, New York, Wheeler was born in 1816 and grew up in modest circumstances on his family’s farm. Leaving home at the age of 21, he worked to put himself through Madison University’s college and seminary, graduating with honors in 1845. Afterwards he accepted the pastorate of the East Greenwich Baptist Church, Rhode Island, where he was ordained. Two years later he was called to pastor the influential Jersey City Baptist Church of New Jersey. His success there led the American Baptist Home Mission Society to offer him a position in California as the first Baptist missionary in that western territory. Accepting the offer, Wheeler and his wife, Elizabeth Hamilton, arrived in San Francisco in 1849, one year before California became a state.

Unfortunately, a throat problem in the mid-1850s forced Wheeler to resign his ministry and most public speaking, at which point he became secretary of the California Agricultural Society from 1854 to 1863. From there his government appointments mounted in the months following, leading to his appointment as head of the United States Sanitary Commission for the Pacific Coast, an organization devoted to helping wounded and needy Union soldiers.

In 1871 Wheeler resigns his Sanitation Commission appointment and accepts an administrative position with the Central Pacific Railroad Company, making a name for himself by inventing a better way for railroads to efficiently land effectively handle baggage.

In 1887 the California Baptist Historical Society is formed and Wheeler becomes the first president of the organization, a position he holds until his death in 1891. The first Baptist missionary in California is buried in Sacramento City Cemetery, in the town where he started the last of three Baptist congregations.