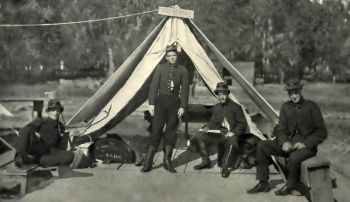 The month of May arrives with great anticipation in the air. While his officers puzzle over incomplete intelligence regarding the movements of Union forces in Virginia, Confederate Robert E. Lee takes time out to attend the baptism of Lucy Lee Hill, the infant daughter of General A. P. Hill. Both families are Episcopalian. As a boy in Virginia, Hill had attended school with future Baptist leader John A. Broadus. But although his mother was converted to the Baptist faith during a Baptist revival in 1840, Hill never embraced the strict social customs of the Baptists, his resistance to such mores leading into a largely irreligious life as an adult. Nonetheless, the baptism of his daughter is a solemn event, and Hill is grateful that Lee is present for the ceremony.

Many white Baptists of the Confederacy venerate Lee, who is publicly complimentary of the South’s evangelical sects, including Baptists. Some Baptists likely pray for Lee quite often, mentioning the earthly protector of the South in their frequent prayers for the Confederacy.

This week’s North Carolina Baptist Biblical Recorder reminds readers of the importance of praying for the Confederacy, referencing a recent commentary from a sister Baptist paper, the Baptist Banner.

Rev. Joseph E. Carter, in the Baptist Banner, suggests that all Southern Christians, of whatever age or sex, rank or condition, “meet God, alone, about the hour of sunset every day,” to make prayer for the country; that each minister meet his flock statedly, as often as he can, for the same purpose; and, where a minister can not be present, that the people meet together informally if necessary.

How often and in what manner Southern Christians actually pray is probably a bit more complex than Carter has in mind. Elites pray for the preservation of black slavery, the source of their wealth. Some common folk white Christians, soldiers and home front dwellers alike, pray for a Southern victory, while others pray that the war will simply come to an end so that their sufferings might be alleviated. Still others, having accepted U.S. President Abraham Lincoln’s offer of amnesty and taken an oath of allegiance to the United States, pray for Union victory. Black Christians of the Confederacy, meanwhile, pray fervently for their freedom.

Each night a kaleidescope of thousands, perhaps hundreds of thousands, of prayers waft upon the Southern night air in a spiritual cacophony. Day after day, the sun rises and the sun sets over the incessant petitions.

One day the prayers will be weighed and answers meted out according to the will of the Almighty. On one matter all petitioners agree: may that day come soon.