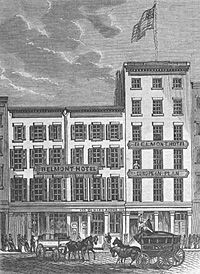 While Sherman‘s army continues marching through Georgia with little opposition, destroying infrastructure and confiscating crops as they move eastward toward the coast, Confederate agents today stage an attempt to burn New York City.

The plot has been afoot for quite some time, having originally been designed to take place on election day, only to be called off when conspirators entered the city and encountered a strong Union military presence. Republicans, it turned out, had been anticipating that Confederate agents might try to throw the nation into chaos on election day.

Thus today is the plotters’ second attempt to terrorize New York City. Eight conspirators, having taken rooms in three of the city’s hotels, set out to set ablaze thirteen hotels in total. While they succeed in starting a number of hotel fires, as well as in the P. T. Barnum Museum, federal officials had been tipped off and firefighters, on the alert, are able to extinguish the flames without major damage to the buildings.

Their plot foiled, the leading Confederate conspirators manage to escape to Canada.

While New York City is thus saved from a Confederate plot, today’s Staunton (Va.) Republican Vindicator newspaper publishes a brief article about efforts to meet the needs of the orphans of deceased Confederate soldiers, of which Southern Baptists are at the forefront.

On last Thursday evening, a meeting in behalf of the Education of the Children of deceased and disabled Soldiers was held at the Baptist Church of this place. After prayer by Rev. W.S. Baird, Wesleyan Female Institute, Rev. A.E. Dickinson of Richmond, addressed the congregation. He states that there were in Va. 5000 children, whose fathers had perished in this war, which number was of course increasing every day–that last June at the Va. Baptist General Association a movement was inaugurated to secure the education of these little ones, and that the plan was to expand all monies secured in sending such children to the best and most convenient schools, without regard to denomination. He eloquently dwelt on the claims of the soldiers, whose chief anxiety was for his loved ones at home, and by whose sacrifice and suffering our safety was secured, and our victory must be won. He dwelt on the feelings of the widowed mother, and urged that we owed it to her to aid in providing for her children whose Protector had died for us. He then spoke of the importance to our nation of giving this large and increasing class of youth at least a good English education–such as would enable the truly talented among them to rise higher, and would prepare all for the ordinary business of life. He was followed in a few statements by Rev. Geo. B. Taylor, and then a subscription amounting to nearly $11,000 was secured. It is hoped that the committee, consisting of H.H. Peck, C.R. Mason, and W.H. Peyton, appointed to increase this sum will run it up to over $20,000. Mr. Taylor also announced that the following gentlemen, vi: C.R. Mason, W.H. Peyton, W.J. Shumate, W.J.D. Bell and M.G. Harman and himself had been appointed to act for the Central Committee in Richmond in finding out and putting to school all the children in the Valley of the class referred to. This Committee will doubtless make some communication to the public, but it may be stated here and now, that children of deceased soldiers, reported to them will be provided with tuition and books at such schools as their friends may select. Teachers in every neighborhood would do well to look up such children and report them Ministers and Magistrates and indeed all who care for the children of the dead soldier are earnestly invite to co-operate. The writer has found in this town five such children, and placed them at the Schools of their choice.