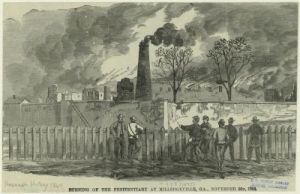 The burning of Milledgeville’s Penitentiary

Today the most prominent Baptist in Georgia is effectively in exile as Milledgeville, the state capital, is firmly under the control of the Union Army.

Governor Joseph Brown, a member of the First Baptist Church of Milledgeville, fled upon the arrival of the Federals on November 23. Traveling southward, he now finds refuge in his family’s farmhouse in Dooly County, site of what is later the town of Cordele. Here the Baptist layman establishes the new, and temporary, state capital while Union forces linger in Milledgeville.

And linger they do. Some 30,000 troops confiscate crops and livestock, burning or otherwise destroying the local arsenal, railroad depot, railroads, bridges and more, while freeing slaves (many, perhaps most, of whom are Baptists). Private residences are left intact, as are churches, albeit with some damages.

The state’s buildings are also left standing. Sherman lodges in the governor’s mansion during the temporary Federal occupation of the city, convening a mock legislative session in the capitol building in which the state’s secession ordinance is repealed. Looking beyond the present, the Union general envisions the usefulness of the capital buildings upon the conclusion of the war.

A news correspondent for the Macon Confederate and Telegraph (also known as the Macon Telegraph) this day writes a vivid account from Milledgeville that, in the days ahead, receives wide distribution throughout the state and beyond.

Sir:–For public information we drop you a line or two from this point that it may be known what the Federal army has done in passing through this place. The first appearance of Sherman’s cavalry in our city was on the 20th; not more than twenty men first making their appearance. They lingered on the outskirts of the town, cut the telegraph wires, and after inquiring if any of Wheeler’s men were here, and being answered in the negative, advanced through the streets with cocked pistols and carbines, seizing horses and exciting no little consternation and alarm.

By Monday afternoon Slocum’s corps began to come in by way of Social Circle, Madison, and Eatonton, and the other division under him by way of Monticello. Sherman’s forces came in by the way of Clinton on Tuesday and Wednesday. The columns visiting Milledgeville composed the 14th [difficult to read] and 20th corps, and it is thought numbered some twenty thousand muskets, with corresponding artillery and several thousand wagons. These wagons were mostly loaded with provisions, the army subsisting on what they found on their way in the country.

They spread desolation broadcast—taking everything in their way in the breadth of about twenty miles. Corn, fodder, meal, flour, horses, mules, hogs, cattle, cheep, poultry, of every description, servants that could be enticed and forced off, and these in great numbers.

The last of the army left on Friday forenoon, destroying in its rear the bridge over the Oconee, at this place, having previously burned the Arsenal with three thousand stand of arms in it, blew up the Magazine, and burnt the Railroad Depot. The Penitentiary was burnt by some of the convicts, said to be the women. The railroad has been destroyed for about two and a half miles from this towards Gordon, and for about four miles from Gordon in this direction. We are informed that the road between this and Eatonton was undisturbed except the bridge across Little rivers, which was burned with the depot at Eatonton. The State House, the Executive Mansion, the Factory and the Asylum are left standing, though all but the latter dismantled. The Churches were entered and materially damaged.

The only private residences burnt were those of John Jones, State Treasurer, and Mr. Gibbs’, formerly Colonel Campbell’s. This was done, it is said, by a mob of the soldiers, because he was a South Carolinian. All his household furniture was burnt, and his silver were taken to the amount of about twenty thousand dollars. The city being one vast camp, fences became their fuel, gardens and private yards became highways for horses and men—hence, our city now presents a forlorn appearance.

The materials of the Southern Recorder and Confederate Union were successfully concealed in the country, but some time must elapse before the offices can be again put in operation. We have now no mail facilities except by couriers to your city. As your city has been spared, we hope some method may be adopted by which the distressed with us may be supplied with provisions, as the community are left without food or means of transportation. We need not undertake to describe the scenes of the past week, God grant they never be repeated.

N.B.—We hear of a great many private dwellings, gin houses, and much cotton being burnt by the army on their different routes; some within sight. Also, that several private citizens were shot. It is, however, due to the Federals to say that they respected families in our city, within doors, abut at the same time robbed them of all without. In the country, families were frequently ill-treated, and their houses also sacked.

I omitted to state the proper place that the State House and Executive mansion were after consultation on the part of Sherman and other Generals, left standing on the ground that Georgia, within six months would be again a part of the United States through that action. A staff officer repeatedly asserted that they knew the State would go back. We believe they are mistaken, for judging of the effect of their vandalism on Milledgeville we believe the State will be a unit, as we are, in increased hatred to them. [Illegible] property has only united us more closely in determined resistance, even to death.

Other reports in the days following claim all manner of horrors committed by the Federals. “We are informed that the incarnate devils ravished some of the nicest ladies in the town,” one accuser charges. “Our blood runs cold as we write. We would forbear doing so, but we wish our people to know the destiny that awaits them if the villains are allowed to continue their invasion of the country …. How long, oh! how long is our country to be insulted by these savages? In the name of justice and humanity, we urge our people to vindicate their honor.”

Whether such accusations are true or not, accounts of Federal atrocities serve to steel, in the name of Christianity, white Southern resistance, including the widespread deployment of terrorism, to black equality and federal laws in the post-war years.