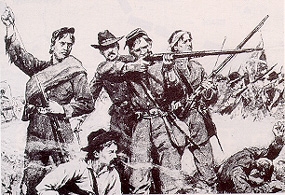 Confederate soldiers in the last hours of the war, depicted by Rufus Zogbaum. Library of Congress.

Confederate General Robert E. Lee, the Union noose tightening around his forces west of Richmond, is desperately searching for a way forward for the remnants of his once mighty Army of Northern Virginia.

Supplies are critical if the Confederate army is to live to fight another day. Ammunition, medical supplies and food: all are needed, and immediately.

Unfortunately for Lee, today Union General George Armstrong Custer attacks lightly-guarded wagon trains en route to Appomattox Station and the waiting Confederate Army. In a battle that pits Union cavalry against Confederate artillery, the outcome is unsurprisingly lopsided. The Battle of Appomattox Station lasts some four hours, during which time Union forces capture the supplies that Lee so badly needs and scatter the unarmed and under-experienced Rebel soldiers.

Afterwards, some of the supplies are burned, others confiscated. Union troops also seize control of the Richmond-Lynchburg Stage Road, thus gaining control of the high ground west of Appomattox Court House—and directly in in the line of Lee’s march.

By evening Lee is thus surrounded front and back. Holding a war council with his officers during the night, the general considers surrendering but ultimately decides to attack Custer’s forces in the morning, believing he will only encounter cavalry. Unbeknownst to Lee, however, three Federal corps are marching through the night to reinforce Custer.

Meanwhile, Union General Fitzhugh Lee dismounts his cavalry and sets up camp near the New Hope Baptist Church in the community of Vera, not far from Appomattox Court House. Union troops dig trenches in the church yard and across the road. The meeting house is at least partially ransacked, one casualty being the loss of church records.

The scene is set, the last hours of the war unfolding. In the darkness Union forces await Lee’s final move.