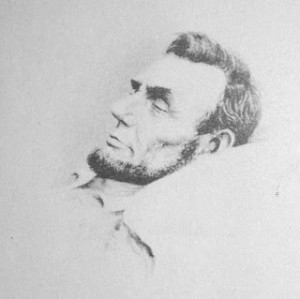 Three days after the assassination that stunned a war-torn nation, the body of Abraham Lincoln is placed on public display at the White House. Fittingly, the president who maintained an open door to American citizens is now lying in an open casket.

In life he became the champion of the enslaved. In death those once in bondage come to pay homage and to weep from the depths of generations of sorrow.

Here at the intersection of freedom and death a Baptist minister encounters a distraught ex-slave standing in line to view the president. Why do you weep? he asks, perhaps thinking of the gratitude that the freedwoman must have for the late president.

“(O)ne of the most touching scenes connected with the funeral of our lamented president,” the famous black abolitionist Frederick Douglass often recollected of that encounter this day, “occurred at the gate of the Presidential Mansion.” The “colored woman,” so the story goes, replies to the Baptist minister: “Oh! Sir, we have lost our Moses.”

“But,” responds the minister, “the Lord will send you another.”

The unnamed woman, according to Douglass, voiced the feelings of millions of former slaves who “from first to last, and through all, whether through good or through evil report, fully believed in Abraham Lincoln.”

Of those millions, more are Baptists than of any other religious faith.

While Lincoln’s casket is the center of this day, the freedom planted and nurtured by the president yet grows amidst national sorrow as Union General William T. Sherman and Confederate General Joseph Johnston agree on terms for the surrender of the last remaining, large Confederate army. Although the document drawn up this day in North Carolina soon proves to be insufficient and necessitates a renegotiation, Johnston’s effectual surrender is yet another acknowledgement that freedom has finally triumphed over the chains of human slavery.