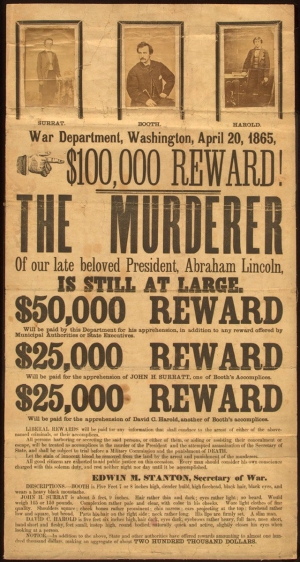 As thousands file by Abraham Lincoln‘s casket in Washington, the hunt for the president’s killer, John Wilkes Booth, continues with great intensity.

Yet another conspirator is located and arrested today, but not Booth.

The killer remains in hiding in the woods of Maryland near the Potomac River, accompanied by co-conspirator David Herold. Having long anticipated being hailed as a hero by a grateful nation, Booth is shocked to learn from newspapers of the public’s great anger directed at him. The reward for Booth’s capture, in fact, has risen to the huge sum of $100,000.

Lincoln, it turns out, was a far more popular president than a Confederate sympathizer like Booth could bring himself to imagine.

Under the cover of darkness tonight Booth and Herold attempt to cross the Potomac into Virginia, but instead get lost in the thick woods. The crossing will have to wait until another day.

Amidst the mourning and the manhunt, life carries on across the nation, Baptists included. In a small sign of progress and in a celebratory occasion, a new sanctuary of the Second Baptist Church, Holyoke, Massachusett, the former having been destroyed by fire in late 1863, is dedicated.

Meanwhile, former Confederate General Robert E. Lee today writes to ex-Confederate president Jefferson Davis. Providing a brief description of the events leading to the surrender of the Army of Northern Virginia, Lee advises Davis, currently hiding our from Union authorities, to surrender in order that peace may be restored.

The apprehensions I expressed during the winter, of the moral [sic] condition of the Army of Northern Virginia, have been realized.   The operations which occurred while the troops were in the entrenchments in front of Richmond and Petersburg were not marked by the boldness and decision which formerly characterized them.   Except in particular instances, they were feeble; and a want of confidence seemed to possess officers and men.   This condition, I think, was produced by the state of feeling in the country, and the communications received by the men from their homes, urging their return and the abandonment of the field.   The movement of the enemy on the 30th March to Dinwiddie Court House was consequently not as strongly met as similar ones had been.   Advantages were gained by him which discouraged the troops, so that on the morning of the 2d April, when our lines between the Appomattox and Hatcher’s Run were assaulted, the resistance was not effectual:   several points were penetrated and large captures made.   At the commencement of the withdrawal of the army from the lines on the night of the 2d, it began to disintegrate, and straggling from the ranks increased up to the surrender on the 9th.   On that day, as previously reported, there were only seven thousand eight hundred and ninety-two (7892) effective infantry.   During the night, when the surrender became known, more than ten thousand men came in, as reported to me by the Chief Commissary of the Army.   During the succeeding days stragglers continued to give themselves up, so that on the 12th April, according to the rolls of those paroled, twenty-six thousand and eighteen (26,018) officers and men had surrendered.   Men who had left the ranks on the march, and crossed James River, returned and gave themselves up, and many have since come to Richmond and surrendered.   I have given these details that Your Excellency might know the state of feeling which existed in the army, and judge of that in the country.   From what I have seen and learned, I believe an army cannot be organized or supported in Virginia, and as far as I know the condition of affairs, the country east of the Mississippi is morally and physically unable to maintain the contest unaided with any hope of ultimate success.   A partisan war may be continued, and hostilities protracted, causing individual suffering and the devastation of the country, but I see no prospect by that means of achieving a separate independence.   It is for Your Excellency to decide, should you agree with me in opinion, what is proper to be done.   To save useless effusion of blood, I would recommend measures be taken for suspension of hostilities and the restoration of peace.