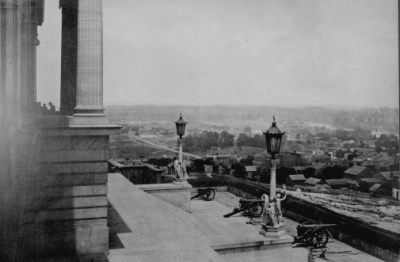 The Nashville capitol during Union occupation.

In 1824 the First Baptist Church of Nashville was established, and ten years afterward the white-led congregation was half white and half black.

As in other Southern, white-led, biracial congregations prior to the war, slave members were constantly reminded from the pulpit that forced subjugation to the white race was God’s will. “He truly honors his master who conducts himself towards him with all due deference [and] obeys his behests cheerfully, promptly, fully and faithfully,” the congregation’s pastor was fond of saying.

Yet so numerous were the church’s black members that white church leaders slowly allowed slaves greater spiritual leeway, albeit always under the supervision of white leaders. In 1848 the First Baptist Colored Mission began their own services. Four years later the mission’s black leaders were allowed to purchase their own meeting house. The mission continued meeting, under close supervision, during the racially-tense 1850s.

But not until the Union Army occupied Nashville in February 1862 were black Baptists in Nashville allowed true autonomy. No longer under the domination of white Baptists of the city, black Baptists worshiped freely, celebrated the Emancipation Proclamation of January 1, 1863, rejoiced over Union Army victories in 1864, and shed tears of joy for the abolition of slavery in Tennessee in March 1865.

The same March black Baptists requested permission from First Baptist Nashville, with whom their church membership yet remained, to establish their own autonomous congregation, to be named First Colored Baptist Church Nashville.

Today, four months following the end of the war, the white First Baptist congregation grants permission for their black members to formally separate and form an independent congregation.

The church thrives in the post-war years, growing to more than 3,000 members by the 1870s. Changing its name to First Baptist Church Capitol Hill in 1895, the congregation serves as an anchor for Nashville’s community. During the 1950s and 1960s and under the direction of pastor Dr. Kelly Miller Smith, the church leads the Civil Rights movement in the city. Hosting Dr. Martin Luther King, Jr. on numerous occasions, the church’s influence is felt throughout Tennessee and far beyond.

In the 21st century the church remains one of the leading black Baptist churches of the South.