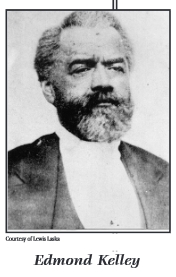 Edmond Kelley is Tennessee’s first ordained African American Baptist minister. Born a slave in Tennessee in 1817, he escaped to Massachusetts, where in 1851 he published his life’s story to date.

Having secretly taught himself to read during his youth, in 1843 Kelley was ordained by the white First Baptist Church of Nashville. Three years later his master went bankrupt, suggesting to Kelley that he quietly leave the state until his master summoned him. For a time he lived in Kentucky and then New York, in the latter formally becoming a freedman and meeting abolitionists. By the time he settled in Massachusetts and became the pastor of New Bedford’s Second Baptist Church, he was a Northern celebrity in some circles. In 1851 Kelley and friends purchased the freedom of his wife and children.

In the ensuing years Kelley arose to become a leading black Baptist in America.

Today, the American Baptist Missionary Convention meets in Alexandria, Virgina. Fourteen delegates meet with U.S. President Andrew Johnson, himself a Tennessean, at the White House in D.C. Among the fourteen is Edmond Kelley.

In the meeting President Johnson keeps his visitors standing, a show of displeasure. The president complains of Northern agitation for equal rights for blacks, noting that even Massachusetts has yet to do so. He also expresses doubt that emancipation will work, and indicates that separate colonies for blacks in the South may be necessary. And black suffrage, Johnson insists, is not possible, as it would lead to white violence against black persons.

A discouraged Kelley writes of his meeting with Johnson:

As the result of all that I have seen and heard, I believe President Johnson’s want of faith in the immutability and ultimate triumph of right over wrong prevents him from giving the colored people a fair chance in the race, the first division of which, as he stated we have entered. We do most heartily commend the President to the affectionate remembrance and prayers and well wishes of all Christians, and to the American people; first that he become a Christian, and secondly that he may be convinced that not anything is expedient that is not right; that to do right is our duty, leaving the consequence with God.

The president’s resistance to racial equality clearly indicates the difficulties that lie ahead for black citizens of the South.

On the other hand, in the mid-west state of Missouri, Baptists of the Old Freedom Baptist Association this day decree that any church affiliated with the association “must declare non-fellowship with those who had been in rebellion against the government of the United States, unless reparation was made by recantation.”

The divisions in America thus remain stark in many instances, South against North, white against black.