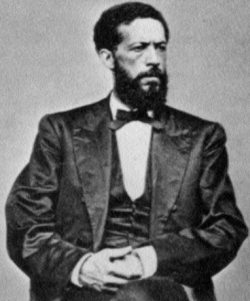 Baptists of Kansas City were involved in the abolition movement before and during the Civil War.

In the first two years of the war, runaway slaves (or contraband) found refuge in Union Army camps and towns and cities of the North. Of the latter, Leavenworth, Kansas served as a refuge for runaway slaves in the Mid-West in early 1862. One Charles Henry Langston, a free black and abolitionist advocate from Ohio, traveled to Leavenworth to see the contraband camp first hand. Meeting with the town’s black and white leaders in the First Colored Baptist Church, Langston learned of the need for teachers and schools for the children of the refugees. Within a matter of a few short months he used his own wealth to organize a “day school.”

Charles Henry Langston was born a free black in 1817 in Louisa County, Virginia as the son of a wealthy planter and his slave mistress. Upon the death of his father in 1834, Charles and his siblings, having inherited their father’s wealth, were sent to Ohio to ensure the continuation of their freedom. In 1835 Charles and brother Gideon became the first African Americans to enroll in Oberlin College.

Professionally a part time teacher and dentist, Charles and brother John Langston, secure financially, became involved in Northern reform movements in the 1840s, including temperance, education, politics and abolitionism. In the 1850s both became officers of the Ohio State Anti-Slavery Society and acquainted with John Brown. Charles publicly applauded Brown’s attack upon the federal arsenal at Harper’s Ferry, Virginia.

Remaining in Leavenworth, by the war’s conclusion Charles was a leading politician and black suffragist in the state. This month the Northwestern Freedmen’s Aid Commission selects Langston as the organization’s agent in Kansas and Missouri. The Leavenworth Daily Conservative editorializes that “no better selection could have been made” for the position. Today Langston is formally appointed General Superintendent of Refugees and Freedmen for the State of Kansas.

In the years following Charles moves to Lawrence and opens a business, remaining a political force in Kansas, advocating for the rights of African Americans. Charles Langston passes away in 1892, one of Kansas’ leading African American citizens in the 19th century.