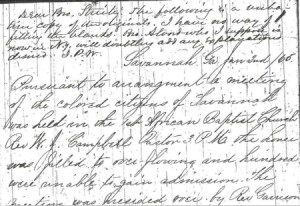 Today is the second day of a meeting called by Savannah’s black clergy for the purpose of forming the Savannah Education Association.

As recorded by William Richardson of the American Missionary Association, participants once again gather at the 1st African Baptist Church, the meeting house that has long served as the public center of black Baptist life in the city. An overflowing crowd is present at the church, most of whom have come with what cash they managed to save in order to help pay instructors so that students will not be charged tuition.

While some Northern missionaries are present this day, the impetus for the formation of the association is local in nature. Whereas in most cases to this point in Union-controlled portions of the South efforts to educate freedmen were spearheaded by Northerners, in Savannah prepared and capable local black leaders had seized the initiative mere days after Union soldiers occupied the city.

Today evidences the effective leadership of local citizens, including the Rev. Garrison Frazier, a long-time and now retired black Baptist minister. Garrison, following the emancipation of the remaining slaves in Savannah in recent days, had quickly become the recognized leader of the city’s now fully free black community. This day, he calls the assembled crowd to order.

Pursuant to arrangement a meeting of the colored citizens of Savannah was held in the 1st African Baptist Church. Rev. W. J. Campbell Pastor 3 p.m. the house was filled to over-flowing and hundreds were unable to gain admission. The meeting was presided over by Rev. Garrison Frazier, by whom it was  called to order. The hymn commencing “Blow ye the trumpet blow” accompanied by the organ was sang after which prayer was offered by Rev. J. Cox, after which the hymn My Country tis of thee was sung.

The President then introduced Rev. M. French Chaplain U.S.A. the Rev. Gentleman spoke as some length and  commanded the closest attention and elicited the heartiest responses throughout his entire address. He attributed the  blessing of Liberty just received by the people to the goodness of God and exhorted the people in leaving their former  masters to do it in kindness. He urged the necessity of making use of their liberty in such a manner as would be commendable. He warned them against falling a prey to idleness and vice. Cited the condition and progress of the people of Port Royal as an encourgement to Freedmen and former masters. Rev. James Lynch was next introduced he said that his heart was full, he could consume hours in expression, but as he expected to remain sometime yet and there was a distinguished gentleman present the Rev. Mr. Alvord, Sec of American Tract Society he was happy to introduce him as a substitute.

Rev. Mr. Alvord expressed himself as being hopeful for the future of the colored people of Savannah, in years past he had lived among them he knew their intelligence and moral worth they need not be afraid. God would take care of them. He wanted them to begin to do for themselves, they were not babes to be carried or rocked in cradles, but men who could develop themselves, now is the time for action. Rev. James Lynch announced that it was desired that the Official Boards of the different colored churches remain after the meeting he had assured Rev. Mr. Alvord that persons could be found among the colored people who would teach schools if organized.

After saying the benediction was announced by Rev. Mr. Hinston.

At the close of the above exercises the the Officers of the various colored churches met. Rev. Garrison Frasier in the chair who opened by prayer. Rev. Mr. Alvord then spoke of the importance of commencing schools immediately and perfecting an organization for that purpose. On motion of Abraham Brooks (?) resolved that the Official Boards of the colored Churches of this city with their Pastor’s constitute an Educational Association. On motion of Andrea (?) Neil resolved that an executive committee of nine be appointed and that Rev. J. Lynch during his stay in the City cooperate with the committee.

The following were appointed Revs Jame Lynch, J. Cox, W. L. Campbell, J. Houston, J. Brown, Charles Bradwell, J. Porter, Scipio Quarterman, J. Mills, Wm. Rose. On motion of _____ resolved that the executive committee meet at the First African Baptist Church Jan 3rd at 3 1/2 o’clock p.m. and that each member of the committee present three candidate for the position of teachers from which they(?) number should be selected. On motion resolved that the executive committee with Mr. French and Alvord see Gen. Geary at the earliest moment and secure association in S. C. and Florida. After which a well drafted constitution was presented as the basis of the proposed ass. and after some discussion was unanimously adopted.

I copy one or two articles art 8 – Any person may become a yearly member of this ass. by paying the sum of three dollars and a monthly tribute of twenty five cents, a life member by the payment of ten dollars, and the same amount monthly______ Art. 13th – This association may cooperate with any ass organized in the Loyal States, for the education of freedmen.

Thereas this association may need protection from Government and more advanced teachers then of themselves they are able furnish and wereas the American Missionary Associat from its long tried antislavery character, has our entire confidence, therefore resolved that we hereby respectfully invite the patronage and assistance of the American Missionary Association in the great work, now evolving upon us.

In reply to the above Rev. W. T. Richardson thanked the people for their expressions of esteem and confidence in the AM Miss Ass and pledged their aid and cooperation in this work.

At this point of the meeting a call was made by the chairman for the people to come forward with their names and money.

The scene was novel and intensely interesting. Men and women came to the table with a grand rush much like the charge of union soldiers on a rebel battery.

Fast as their names could be written by a swift penmen, the Greenbacks were laid upon the table in sums from one to ten dollars, until the pile footed up the round sum of seven hundred and thirty dollars as the cash receipt of the meeting….

The day thus ends with great anticipation. At long last the city’s black citizens, including many families enslaved for generations, will have access to that which white Southerners have long denied them: an education.