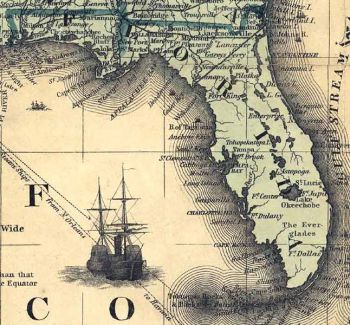 Bethel Baptist Institutional Church of Jacksonville, Florida, the oldest Baptist church in the state, is claimed by both white and black members.

As related by one historian: “Instituted in 1838 by James McDonald and Ryan Frier, who served as co-pastors, Bethel Baptist’s congregation numbered six charter members including two slaves called Bacchus and Peggy.  Church worship occurred at “Mother Sam’s” plantation.  Attended by growing numbers of slaves from local plantations who received day passes from masters in order to permit them to travel safely, Bethel Baptist flourished and grew steadily.”

In 1861 the church constructed a new meeting house, only to watch as federal soldiers occupied the building and turned it into a hospital for Union soldiers. White members fled the church. At some point, perhaps near the end of the war, black members (now freedmen) began using the building again for worship.

Following the war white church members returned and attempted to seize the church from now-free black members. The freedmen however, appeal to the local Union-controlled court, which, with a nod to the majority black membership of the church, rules in their favor.

The now African American congregation, in turn, soon sells the building back to former white church members, using the proceeds to build a new structure, retaining the name Bethel Baptist.