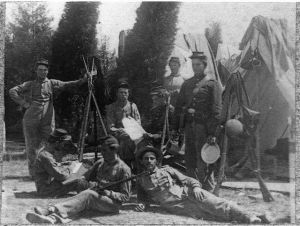 The war is over, and the relief is palatable in Baptist state conventions and associations of the North. Death has touched many families and congregations. Baptists are thankful for the victory of the United States over the Rebellion, and ready to move forward in a world of freedom for all.

Associational meetings of the North thus reflect the feelings of local Baptists in the weeks and months following the conclusion of the war.

The fifteenth anniversary of this association was celebrated yesterday at the Baptist Church, Twenty-fifth-street, near Eighth-avenue. The attendance was very large, full lay and clerical delegations from the various churches being present. Among the audience were many ladies. The object of this convention is to consult together as to the best interests of the churches in this city and in Brooklyn, and to show their respective conditions. Rev. A.H. BURLINGHAM, Moderator of last season, called the meeting to order. Various religious ceremonies were then entered into. The introductory sermon was preached by Rev. J.C.C. CLARK, from Rev. 19th Chap., and part of 10th verse. “The testimony of Jesus is the spirit of prophecy.” A collection was then taken up for the Ministers’ Widows’ Fund.

The officers for the ensuing year were then elected as follows:

Dr. WESTON, on being conducted to the chair, briefly returned thanks.

The convention then adjourned till 2 1/2 o’clock.

A splendid cold collation, provided by the ladies of the church, was spread in the basement, to which both clerical and lay members did ample justice, an invitation being extended to all who desired to partake.

This session was opened with singing and prayer Various letters from Baptist churches were read, among which was the following from the justly celebrated scholar, Dr. W.R. WILLIAMS:

To the Church of Christ in the Hudson River Baptist Association in the Amity-street Baptist Church, Sendeth Christian Salutation:

Worshipping, for the past year, in a hired hall, we have been encouraged by the attendance, and yet we have not had all the facilities for a Sabbath-school, for the week-day meetings that would be desirable to give the church scope for the aggressiveness and activity that are needful to the growth, and oven the life of a Christian church. The broken health of the pastor cooperating, our state has been one of much languor, and we can report no additions.

Death has removed our Senior Deacon, JOHN BOWEN, at the ripe age of 95 years. He departed in peace, a Christian of great decision and energy of character.

Joining with you in congratulations and lowliest thanksgivings before God, for his vast mercies to our nation, through which we have, as a people, wrestled, and imploring for you, as for all else who hold the head in our land, a new baptism of the Holy Ghost, quickening and arousing us to the discharge, as a nation, of our new and vast responsibilities,

At the conclusion of the reading of the letters, the Rev. Dr. CHOWN, of England, preached an able and eloquent sermon, taking his text from 102 Psalms, 13th and 15th verses inclusive, after which the Convention adjourned to meet at 8 o’clock P.M. At that appointed hour the convention met and discussed at length the Sunday-school question, and adjourned to meet to-day at 9 o’clock A.M.