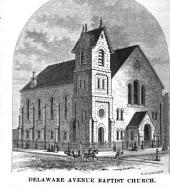 A native of Wales, Ellis with his family emigrated to America in 1850 and settled in Waukesha County, Wisconsin in 1855. “In the summer of 1857 he gave his heart to Christ and being thoroughly imbued with the principles of the Baptist faith from childhood, he could not satisfy a good conscience without being baptized into the fellowship of some Baptist church.”

He walked nine miles to the Pewaukee Baptist Church to confess his faith and ask for baptism, which took place in Pewaukee Lake. His baptism, the first in fourteen years in the church, “was the beginning of a great revival.”

In 1859 a young and devout Ellis was licensed to preach and helped form the Welsh Baptist Association.

“Then came a call for 600,000 volunteers. The fire of patriotism was kindled in the soul of young Ellis and he felt he must help to put down the rebellion, so he enlisted and was mustered into the service of the United States army, Aug. 13, 1862.” Ellis was captured in 1863 by the Confederates and briefly imprisoned, before he was exchanged. He fought in the Atlanta campaign, “marched through Georgia to the sea, and then through the Carolinas and Old Virginia to Washington, and was present at the grand review.”

During the war “he was connected with large religious movements, witnessed hundreds of conversions, took part in the organization of a brigade church with four hundred members.”

Having toured the South as a soldier, after the war Edward Ellis returns home and pastors churches in Wisconsin and Illinois.

Also this day the Delaware Avenue Baptist Church in Wilmington, Delaware is established. Prospering, by the early 1880s the church has over 1,000 members and operates two mission schools. During the early post-war decades the church subscribes to the 1834 New Hampshire Confession and embraces pre-millenarian doctrine. The church’s trajectory is similar to that of many others of the North in the post-war decades.