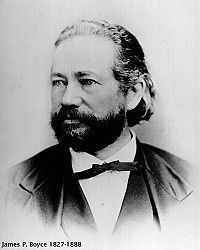 With the war over, the faculty of the Southern Baptist Theological Seminary in Greenville, South Carolina, shuttered during most the war, hope to reopen the institution. Success however, is far from assured.

Compounding the seminary’s prospects are the reduced fortunes of professor and president James P. Boyce. Wealthy prior the war, during the great conflict his business interests failed, leaving him in significant debt. To add insult to injury, Union soldiers near the end of the war ransacked his mansion in Greenville. Fortunately, Boyce had previously removed and hidden his personal valuables.

Still, Boyce is so financially destitute as to be uncertain whether he ought to return to the seminary. Working to pay off his business debt seems the more prudent course.

The other three faculty members, however, realize that Boyce’s remaining personal cash is instrumental to the immediate future of the school. Today John A. Broadus writes to Basil Manly, Jr., declaring that “the future of the seminary” should be “a matter of special daily prayer.”

After assessing the situation, Boyce agrees to loan the seminary the sum of $3,000, enough to pay each of the three faculty members — Broadus, Manly and Whitsitt — $1,000 each in salary for the 1865-66 school year. While they restart the seminary, Boyce would try to right his business affairs.

After months of discussion, all four agree to the plan. The seminary opens in November. Several years of struggle yet lie ahead, but the seminary survives, thanks to Boyce.

While Broadus and Manly this day fret about the future of their seminary, another South Carolinian, John James Little, is paroled from the Confederate Army in Thomasville, Georgia. Prior to the war, Little moved to Wayne County, Georgia. In August 1861 he rode his horse to Brunswick, Georgia and joined Company A, Wayne Rangers, of the 4th Georgia “Clinch’s Cavalry.”

In addition to fighting in various battles of the past four years, Little married while on furlough in January 1863 and then became a prisoner of war in June 1864. His parole ends his prison time.

After the war Little becomes a circuit riding preacher in southeast Georgia. Like many Baptist pastors of the post-war South, he is void of any formal education, but his lack of training is not a hindrance to his rural ministry. Little helps establish and pastors several churches, including the Little Memorial Baptist Church in Browntown, near Jesup, Georgia. The church yet exists.