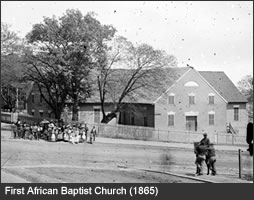 This month Richmond’s First African Baptist Church debates pastoral leadership. White minister Robert Ryland, president of Richmond College, has long been their preacher, as antebellum and Civil War laws mandated that black congregations must be overseen by a white minister. Ryland, although a defender of black slavery, was somewhat controversial in that he advocated for the education of slaves in order that they could read religious material, and allowed black members to “preach” from the pews.

With laws requiring white oversight of black congregations no longer applying following the war, Ryland submits his resignation. Members, however, are cautious. There is division over whether or not to accept the resignation.

Next month Ryland offers his resignation again, and this time the church accepts. Following this, the church calls a Northern white anti-slavery preacher. The matter is not yet resolved, however, and in 1867 the congregation selects James H. Holmes, an African American and already serving as an associate on the church staff, as the church’s first black pastor. Henceforth the church is led by black pastors.

Meanwhile, today’s edition of Harper’s Weekly features, on the front page, a story of the capture of former Confederate President Jefferson Davis, while the main story on the second page is entitled, “The Main Question: Black Suffrage.” The writer argues that blacks must be allowed to vote, noting, in addition to the need for racial equality in the South, his belief that long-standing white Northern opposition to black suffrage was reversed by the Southern Rebellion.