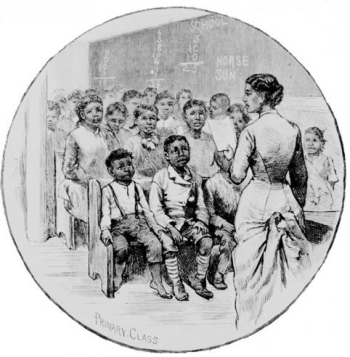 A Freedmen’s school. Southern Baptists, largely refusing to assist in the education of freedmen, took offense at American (Northern) Baptists sending missionaries to the South to educate their former slaves.

The Alabama Baptist State Convention (white), meeting this month in Marion, discusses, among other matters, the state of race relations in post-war Alabama.

Delegates pretend that nothing has changed, resolving to treat their former slaves no differently now that they are legally free. On the other hand, unlike their overt Confederate Christian nationalism voiced during the war, Alabama Baptists now declare their separation from the (Union-controlled) state.

A committee on the “Religious Instruction of the Colored People” determines:

“THE special Committee, to whom was referred the Report of the Committee on the Religious Instruction of the Colored People, together with instructions on the subject of their report, beg leave to submit the following:

1. Resolved, That the Churches of Christ having no legitimate connection with the State, should remain unchanged by the results of political revolutions, except in so far as these may open up new fields of usefulness, or as furnishing inducements for renewed and increased Christian effort.

2. That the changed political status of our late slaves does not necessitate any change in their relation to our churches; and while we recognize their right to withdraw from our churches and form organizations of their own, we nevertheless believe that their highest good will be subserved by their maintaining their present relation to those who know them, who love them, and who will labor for the promotion of their welfare.

3. That the condition of our colored population appeals very strongly to the sympathy of every Christian heart, it demands, at the hands of all who love the Saviour, renewed exertions for their moral and religious improvement; and to this end we would recommend the establishment of Sunday Schools, the providing for them the preached gospel, and the adoption of all practical appliances which will tend to ameliorate their condition, and induce them to become sharers in a common salvation.”

Words of self-delusion these are. Black Alabamans know only too well that their white brethren did not and do not have their best interest in mind, and have little interest in maintaining, beyond necessity, relationships with the very people who kept them in bondage, in the name of God and Bible, for generations.