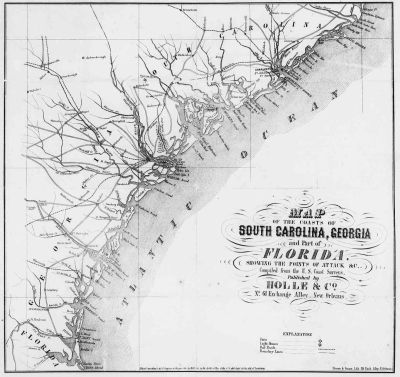 The Colored People’s Convention of the State of South Carolina continues in Charleston, held at the Zion Presbyterian Church. Many Baptists are present.

Relations with white South Carolinians, who largely resent the fact that their former slaves are now free persons, is a topic of much conversation. Although Union forces are now in control of the state, South Carolina’s leading citizens, undaunted and defiant of Northern rule, are determined to exploit and keep in servitude black Southerners. Therefore, delegates to the convention realize that caution is needed in exerting their rights as freedmen.

Accordingly, two resolutions are passed that are intended to sooth the anger of whites while nonetheless stating the determination of freedmen to better themselves.

“Resolved, That as the old institution of slavery has passed away, that we cherish in our hearts no hatred or malice toward those who have held our brethren as slaves, but that we extend the right hand of fellowship to all, and make it our special aim to establish unity, peace and love amongst all men.

Resolved, That we encourage amongst the freedmen, education, industry, and economy.”

The statement regarding absence of malice and anger is likely not true, but is politically wise. Considering the determined opposition of whites, who hold the keys to power despite Union control of the state, a great deal of political wisdom is needed to chart an upward path forward for the former slaves in South Carolina.

Source: “Proceedings of the Colored People’s Convention of the State of South Carolina, held in Zion Church, Charleston, November, 1865. Together with the declaration of rights and wrongs; an address to the people; a petition to the legislature, and a memorial to Congress” (link) and (link)