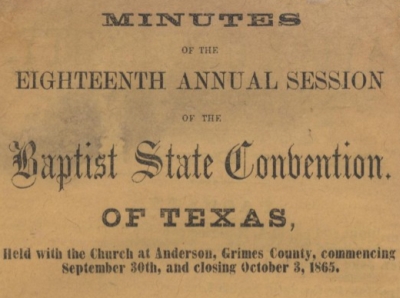 The Eighteenth Annual Session of the Baptist State Convention, assembled in the Anderson Baptist Church in Grimes County, wraps up today.

The state organization is affiliated with the Southern Baptist Convention, whose 1845 break away from Baptists of the North, in order to preserve black slavery, sealed the inevitability of the Civil War that took place 16 years later.

Returning to some sense of normalcy following the war is an overriding theme of the annual gathering assembled this day.

The Confederacy, of course, was in the right all along. Despite defeat, God’s will has not been thwarted. He yet remains a God of the favored white race, and has their best interest in mind.

The upheavals of the year are thus summarized.

The year commenced under the pressure of a war unsurpassed in its magnitude, and involving in its issue the independence of our people, their wealth, and in a great measure, their dignity and happiness. The anxiety of the public mind while these issues were pending; its agitation, when the probability of an adverse decision grew into a terrible certainty, and the doubt and distress necessarily accompanying the upturning of the foundation of our social system, have paralyzed to a great degree all our benevolent enterprises, and suspended mid-way our best matured schemes for the promotion of the objects for which this Convention was organized The christian,however, cannot be bereft of the conviction that no plan or purpose of Almighty God can be defeated—that in the midst of the turmoil, agitation and strife, incident to human affairs, the mind of God is serene, the virtue of the Atonement is unimpaired, human instrumentality preserves its place in the divine economy, and the will of God, concerning the redemption and salvation of man, is being accomplished. He works with us for our happiness and good, and without us for his own Glory. But with us or without us, the will of God is done. Let us continue then, although the clouds may lower and the storms of temporal adversity assail Divine Truth, and in the intellectual and spiritual growth of the human race.

The black race, however, God deals with differently. Race relations have, thanks to the superior military might of the Northern states, been transformed by the imposition of freedom upon blacks.

Not that the slaves really wanted, freedom, though, if one is to believe the white Baptists assembled this day.

A report on the “Religious Condition of Colored Population” states thus:

Since the last annual meeting of this Convention a great change has taken place in the social and legal condition of this class of our population. By the success of the Federal army, and the Proclamation of the President, the former slaves have become freedmen, and it becomes our duty as good and loyal citizens, and as a body of Christians, to adapt ourselves to this change; and in doing so, we should remember that the freedmen are in no way responsible for this change; and the fact of their docile conduct and general good behavior during the last four years, should entitle them to our Christian regard. While it has ever been the desire of this Convention to furnish this class of people the benefits of a preached Gospel, we should not now, by any means, neglect or overlook their spiritual welfare.

Your committee would be pleased to recommend some definite plan for the churches to adopt regarding the Colored Population of their respective communions, but on account of the frequent change of military orders and their uncertain and future action, together with the various conditions and dispositions of the blacks in the several localities of the churches—we cannot say more than to strongly recommend that ministering brethren and churches furnish them with preaching and the use of houses of worship as heretofore, in order that the “poor may have the Gospel preached unto them”—and leave the subject of separate church organization, to the circumstances surrounding each church; manifesting and proving at all times, and on all occasions, our desire for their spiritual improvement and moral elevation.

Beyond “spiritual improvement and moral education,” white Baptists of the South feel little to no responsibility for the race that for generations they enslaved in the name of God.

Source: “Minutes of the Eighteenth Annual Session of the Baptist State Convention of Texas, Held with the Church at Anderson, Grimes County, commencing, September 30th, and closing October 3, 1865″ (link) and (link)