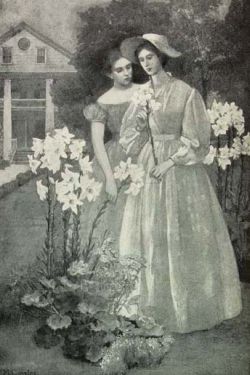 Males are not the only members of the white race suffering from the loss of privileges, properties and loved ones in the recent war.

This week’s Virginia Baptist Religious Herald publishes an article entitled, “To Southern Women from a Southern Woman,” purportedly penned by an (anonymous) female.

The audience, however, is not common white women, but rather plantation mistresses who now are forced into domestic roles previously relegated to slave women.

Now, the hope is that post-war women, while remaining in their sphere of gender inferiority and restricted roles, will help the white South overcome the great losses of southern white males to death and debilitating injury, and the exodus of black males from forced slavery in the service of whites to freedom and autonomy apart from the white race.

“Four years of cruel war have laid waste our fields, burned our cities, scattered the bones of our husbands and sons on a hundred battle-fields, and made desolate our once happy homes. The blighting of cherished hopes, and the destruction of the results of years of toil, have bent the forms and bowed the heads of our old men. Our brothers and friends, whom carnage has spared, have returned to us maimed in limb, with shattered health and spirits crushed by the want of success in what they deemed a struggle for freedom. Many of our matrons and maidens, amid the charred ruins of the homesteads, weep their dead, or sit in silent despair–more touching than tears.

Few, if any, have escaped suffering. The land mourns on account of these woes.—Many and severe have been our afflictions, but shall we, the women of the South, the descendants of noble Christian matrons, honored in the land, sink into listless despondency, or waste our years in vain lamentations?….

History and observations have taught us that the fallacy of the notion that where their is right there must be success. God’s word teaches that prosperity is not always indicative of of his favor, nor adversity a proof of his displeasure….

Some who have been born in affluence, have been reduced to poverty. Let not such spend time in dispiriting regrets. Linger not on the past–its joys or its sorrows, but with strong hearts and firm resolve discharge present duties and look hopefully into the future. There was no merit in smiles and cheerfulness, when wealth gratified every wish and shielded from every discomfort. But now, by patient endurance and hopeful counsel, you may lift the burden from the heart, which has hitherto been your stay and comfort. Be not ashamed of labor, but by your example make it respectable. Husbands and children have certain ‘inconvenient habits of eating and drinking.’ If necessary, with your own hands prepare their food. Esteem it a privilege to contribute to the comfort of those to whom you are bound by every tender tie of love and duty. Be not discouraged by your want of experience. System and perseverance, with the aid of modern improvements, will soon render easy, what may now be thought, severe drudgery. There is one concealment you may prudently and wisely have, from the partner of your joys and sorrows. Never let him see how much you are harassed by domestic perplexities. Let not the care of your family and the ministering to bodily wants engross your soul. Do not sink yourself into domestic drudges, nor permit your children to be mere hewers of wood and drawers of water. Let them be early and seduously trained to habits of order and industry, but remember the soul and heart have wants as well as the body. By method and diligence, time may be secured for the culture of the mind–by the practice of sweet courtesies of life, love will be strengthened and the heart enlarged. With such training, your daughters will be less elegant, but will not be less useful ….”