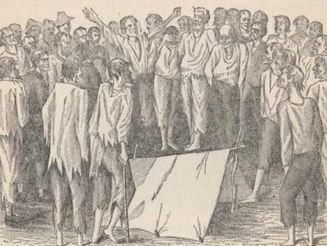 A worship service in Andersonville Prison during the Civil War.

Today long-time Kentucky Baptist layman and former state politician Leonard Stephens writes to his brother William. Lamenting, in part, the difficulties he is having with his former slaves, Stephens offers a snapshot of white-black relations in the post-war months:

“Since you left I have been considerably troubled over the threatening of my negroes to leave here. The morning after you went away they commenced by wanting to know what I intended to give them for their years work & that unless they receive satisfactory assurances of being paid they would leave very shortly. This was at a time when we had just commenced feeding our hogs & I did not see how to get along at al if they then left, so I made them offers that seemed to be satisfactory, but they have now, for the last two weeks been threatening to go and I have no assurance from one day to another that they will stay.”

Meanwhile, an article by a correspondent from the New York Times describes the recently-created Andersonville National Cemetery, situated on the site of the former, and infamous, Confederate prison that at one point housed thousands of captured Union Soldiers, including many Baptists:

ANDERSONVILLE NATURAL CEMETERY, (NEAR THE ANDERSON STOCKADE) GEORGIA, Sunday, Out. 22, 1865.

A short ride from Macon brought me to this celebrated village.

There is no other place in this broad republic so hall of historic glory as this sacred spot. And the heard swells up in holy ecstacy as the eye looks upon that bannar of beautiful blue, which waves in billows of red and white crested with stars, from the staff at the cemetery’s centre.

“Above doth float their country’s flag, —
Beneath, its champions sleep;
They died to save the nation’s life, —
Let all that nation weep.
From east to west, from north to south.
This bread land o’er and o’er,
We’ll sigh for those who died for us,
And love them evermore.”

About a quarter of a mile north of the north end of the stockade or death prison, is the south entrance to this National Cemetery. The burial grounds, as surveyed, planned and inclosed by order of Gen. WILSON, Miss CLARA BARTON’s party, &c., is a square, containing forty-seven acres. Entering the south gate, next the stockade, a broad carriage-way leads directly northward through the centre of the grounds, on either side of which are very many long rows of head-boards denoting the trenches where our dead are buried. A neatly graded pathway, at the foot of the entombed soldiers, runs the full length (several hundred feet) of each of these trenches, where the name painted on each board can be easily read by the passing visitor. These two solid, close-columned division of dead soldiery extend nearly to the flagstaff, which is in the centre of the grounds. A little to the right, are buried six men — I cannot call them soldiers — who were hung by our soldier-prisoners for murdering and robbing their comrades. The third and largest division of graves is located in the northeast corner, occupying several acres. The last head-board bears the number 12,848. Add to this 64 prisoners who died of small-pox, buried in another inclosure, the six criminals who were hung, and one negro soldier, and the total mortality of which we have any record amongst the soldiers of the Union is 12,919. Including 114 rebels, buried here, the grand total is 13,033.

The cemetery is undergoing a thorough cleansing, substantial fences are in process of completion, inclosing the whole grounds. A modicum of ornament is being added in the shape of architectural gates, etc. On a little white-painted board at the left of the main south entrance appears the following inscription:

On fame’s eternal camping ground,
Their silent tents are spread;
And glory guards with solemn round
The bivouac of the dead.

Further along the wide carriage-way, toward the centre, on the right, we read:

Whether in the prison drear,
Or in the battle’s van,
The fittest place for man to die.
Is where he dies for man.

And on the left:

The hopes, the fears, the blood, the tears,
That marked the battle’s strife,
Are now all crowned by victory,
That saved the nation’s life.

Close to the flagstaff, from which floats the starry banner, at the central terminus of this broad carriageway, is another inscription, running thus:

A thousand battle-fields have drank
The blood of warriors brave,
And countless homes are dark and drear
Thro’ the land they died to save.

I append a list of the names of all the brave patriots from the State of New-York who suffered for their country the horrors of Andersonville Prison, and who died, rather than take the rebel oath and live. So long as history shall chronicle their glory, or the flag they defended wave over the land of the free and the home of the brave, let these heroes be honored and loved.