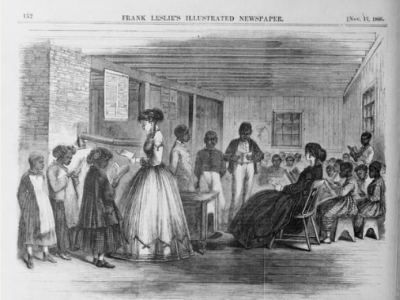 Elizabeth Van Lew, of the Van Lew family that owned Bowser, arranged for her education in the North and granted her much freedom prior to the war. From 1855 the young woman served as a missionary to Liberia, a nation settled by blacks from America. In 1860 Mary returned to Richmond. While yet a slave, she lived with much freedom under the protective care of Van Lew.

During the Civil War and utilizing various pseudonyms, Mary worked as a Union spy in the Confederate White House, in collaboration with Elizabeth Van Lew, who was part of Richmond’s Unionist underground. Prior to the conclusion of the war Mary stopped using her married name of Bowser and instead became known as Mary Richards. Mere days after the fall of Richmond, Richards found employment with the Freedmen’s Bureau, teaching black children.

This month Richards tours New York, and perhaps other states of the North, lecturing about her espionage activities during the war. During her Northern sojourn she employs several different names, seemingly aware that by speaking of her involvement as a black woman in the defeat of the Confederacy, her life could be endangered.

Today the former Union spy, using the name Richmonia Richards, gives a lecture at the Abyssinian Baptist Church in Manhattan, New York. One black newspaper describes her speaking style as “very sarcastic and at times quite humorous.” It is one of many lectures in the North, yet one of only two for which documentation exists, in no small part due to Mary lecturing under a variety of names. The lecture tour lasts perhaps for a month or two.

In the next two years Richards is back in the South, teaching freedmen in Virginia, Florida and Georgia. In early 1867 she establishes a freedmen’s school in St. Mary’s, Georgia. There she meets Harriet Beecher Stowe.

Nothing is known about Mary Richards beyond 1867, however. The veracity of some of the known details of Bowser’s life remain uncertain, as, in addition to using an assortment of names, she often embellished her own accomplishments.