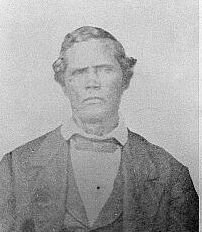 Born a slave in Virginia in 1802, Wilkes B. Flagg learned the blacksmith trade in Georgia. His owners also allowed him to learn to read and write.

With extra money earned from blacksmithing, Flagg purchased his freedom and that of his family. By 1850, Flagg had become a Baptist minister while he continued his blacksmithing. Ever industrious, he also became a “proficient head waiter” for several Georgia governors, including Joseph Brown, a Baptist and the governor of Georgia during the Civil War.

Today, Flagg and his wife Lavinia legitimize their marriage in Milledgeville. As with most slaves, the couple had not been allowed to formally marry during enslavement.

During the years of Reconstruction Flagg is a leader among African Americans in Baldwin County. For a few years he owns large landholdings and is involved locally in politics.

In addition to preaching, Flagg helps establish a school for young black children in Milledgeville, the only such school in the community. Originally housed in the Flagg Baptist Church, the school soon receives assistance from the American Missionary Society and the Freedmen’s Bureau and transitions to a stand alone institution, the Eddy School.