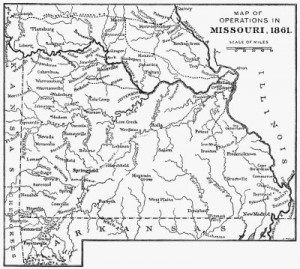 Testifying to the large number of Baptist churches across the North and South, many Civil War battles and skirmishes take place near or in Baptist church yards. In south central Missouri, in the small community of Vera Cruz, just such a battle unfolds.

The United States controls Missouri, but contingents of Confederate troops roam the countryside in the southern portion of the state. Stationed in Vera Cruz since August, the Union’s Missouri Home Guards Company H, aided by two companies of the Illinois 10th Cavalry regiment, today come under fire from a large Confederate force intent on pushing the Union Army out of the region.

Setting up their 6-pound cannons on the bluff above town, the Confederates bombard the buildings housing Union forces, including the courthouse. Down below near Clark’s Mill, the Union cavalry returns fire with much smaller 2.5-pound cannons. In between, and near Clark’s Mill, is the Friendship Baptist Missionary Church (Primitive Baptist).

Despite the ordinance flying overhead, the old log church is apparently undamaged, although the courthouse is largely destroyed. The Union calvary run out of ammunition after a few hours, and, after enduring a small number of casualties, are forced to surrender. The Confederate troops then burn the blockhouse at Clark’s Mill, confiscate the Union horses, and release their prisoners. While the Confederate victory is a small boost to southern moral in the western theater of war, the North retains control of Missouri for the duration of the war.