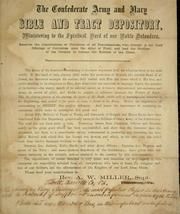 The South Carolina Baptist State Convention meeting concludes today in Darlington. Army missions (missionaries and  colporters both) have been much on the minds of delegates. A listing of religious tracts produced for Confederate soldiers in the past twelve months offers insights into religious materials that are currently circulating in army camps.

The deployment of Christian tracts will only intensify in the coming months, corresponding to the sinking fortunes of the Confederacy and fostering a gradual shift among some Confederate Christians to the viewing of a spiritual triumph of the South as an even nobler goal than battlefield victory.

Source: Minutes Of The 43d And 44th Anniversaries Of The State Convention Of The Baptist Denomination In S. C., Held At Darlington, July 24th To 27th, 1863 (link)