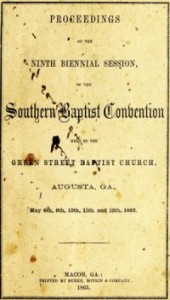 The bi-annual meeting of the Southern Baptist Convention assembles today in the Green Street Baptist Church of Augusta, Georgia (a location chosen after the original plan to meet in Columbia, Mississippi was jeopardized by the presence of the United States Army in the state). As in 1845 (the year of the formation of the SBC), the delegates are comprised solely of white males, most of whom are slave holders. Indeed, income from slavery has been the economic foundation of the Southern Baptist Convention to date.

The proceedings open with a hymn, a reading of a portion of Psalm 145 and a prayer. Afterwards, officers are elected. Five resolutions then follow, collectively acknowledging the impact of the war upon Southern Baptists and a collective belief in God’s providential hand upon the Confederacy:

Resolved, That a Committee of seven be appointed to inquire whether it is expedient for this Convention to attempt anything for the promotion of Sunday Schools, and if so what?

Resolved, That a Committee of one from each State be appointed to report suitable resolutions to be adopted by the Convention in regard to the war now raging in this country.

Resolved, That it is the sense of this body that the field opened in our Army for the labor of the ministry is one of the most important which can be entered at the present time, and that the Churches are called by the Providence of God to make vigorous effort to send forth Missionaries and Colporters in this field, through our Board of Domestic Missions, and the S. S. and Pub. Board of the Va. Bap. General Association.

Resolved, That in view of the evils which threaten to result from the serious interruption of education which the war has caused, this Convention think it appropriate to urge the members of our Churches, who are parents, to keep their children steadily at school, and to be increasingly diligent in their domestic training.

Resolved, That half an hour, commencing at 10 A. M., on each day, of the session of the Convention, be devoted to special exercises, invoking the blessing of God on our country.

Today’s session closes with a sermon from Micah 4:1-4, evidencing the hope that Southern Baptists have for Confederate victory over the United States:

But in the last days it shall come to pass, that the mountain of the house of the Lord shall be established in the top of the mountains, and it shall be exalted above the hills; and people shall flow unto it.

And many nations shall come, and say, Come, and let us go up to the mountain of the Lord, and to the house of the God of Jacob; and he will teach us of his ways, and we will walk in his paths: for the law shall go forth of Zion, and the word of the Lord from Jerusalem.

And he shall judge among many people, and rebuke strong nations afar off; and they shall beat their swords into plowshares, and their spears into pruninghooks: nation shall not lift up a sword against nation, neither shall they learn war any more.

But they shall sit every man under his vine and under his fig tree; and none shall make them afraid: for the mouth of the Lord of hosts hath spoken it.