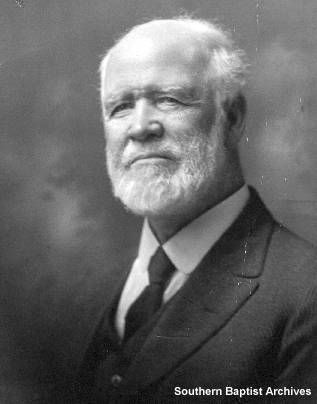 A Confederate scout is on a mission this day.

James Bruton Gambrell (1841-1921) is a captain in the Confederate Army, commanding a squadron of scouts in General Robert E. Lee‘s Army of Northern Virginia. Some remember Gambrell, as a Confederate scout, as firing the first shot of the Battle of Gettysburg. War is the fodder of many stories, both true and false: Gambrell in reality did not fire the first shot of Gettysburg, but the claim makes for a good story that is retold for decades to come.

What is known for sure about young Gambrell is that he was born in Anderson, South Carolina, and grew of age in Mississippi. “Here, as a boy on a typical Southern plantation, he grew up,” as one biographer later summarized his boyhood years.

At the age of fifteen Gambrell attended a revival meeting at the Pleasant Ridge Baptist Church and was converted. His parents envisioned a good education for their son, but the war interrupted any such plans.

During the nearly three-year-long war, Gambrell has proven his mettle as a scout. Yet today’s early morning mission is like no other.

Having manged to slip behind federal lines, the Confederate scout under the cover of darkness makes his way to the Cordell home in Beartown, Virginia. Once there, at 1 a.m. in the morning, he weds Mary T. Corbell. Then, just as stealthily, the couple slip back past the federal lines and into Confederate territory.

The Baptist giant George W. Truett, following the deaths of James Bruton and Mary, composed a biographical sketch of James which includes the following paragraph about Mary:

No woman of song or story was ever a more sympathetic, inspiring wife than Mary T. Gambrell was to her illustrious husband, during the forty-seven years of their wedded life. One had to know them both fully to realize how she reinforced and sustained him in all his undertakings. His mind was that of a philosopher; hers keen and scintillating. He was democratic, with a tendency to trust people; she had an almost uncanny penetration through pretense and sham, that often saved him from imposition, through a long public life, dealing with all kinds of men.

James Bruton obviously survives the war. Truett writes of what happened next, offering insight into how white Southerners, from the perspective of the early 20th century, interpreted the post-war years:

When the war closed, Captain Gambrell and other brave, thoughtful Southern men faced a testing condition that has probably never had a parallel in history. Their religion brought them through. Southern leaders were intelligently and sincerely religious. He was brought by a remarkable religious experience to see the way for himself and the rest through the period of perplexity, misunderstanding and social chaos, to peace, order and prosperity. It was the Christ way–the path made plain by the Master.

In November 1867, he was ordained to the Gospel ministry by the Cherry Creek Baptist Church. This church was composed of both whites and Negroes. Shortly after his ordination the Negroes were organized into a church of their own, and young Gambrell was invited to preach for them. He accepted the invitation of the church, and always referred to it as a pleasant, satisfying experience. He served other rural churches until 1870, when he was called to West Point. In 1873 he went to Oxford Church as pastor, and served it during the five years he was in Oxford. All these churches were in Mississippi.

In 1870 Dr. Gambrell began the practice of writing on some subject every day. He did this as a means of self-improvement, little dreaming that writing was to be so large a part of his life’s work. He continued this habit as long as he lived. He did not offer many articles to the press at first, but faithfully wrote one every day.

In 1877 the Baptist Record was launched; he was asked to be the editor of the new paper, and accepted.

Gambrell’s accomplishments in Southern Baptist life mount over time. In 1891 he plays an instrumental role in leading Southern Baptists to found the Sunday School Board. In 1893 he is elected as president of Mercer University. In 1896 he resigns from Mercer in order to accept an offer to become the secretary (executive director) of the Baptist General Convention of Texas. In 1909 he writes a book of his experiences in Texas, entitled Ten Years in Texas. Resigning from the Texas Baptist convention in 1910, he becomes editor of the Baptist Standard. Four years later he leaves the Standard to return to his former position as secretary of the BGCT, which he retains for two years. During this time he teaches at the newly-formed Southwestern Baptist Theological Seminary. In 1917 he is elected as president of the Southern Baptist Convention, serving four terms. In 1919, he becomes a leader within the Baptist World Alliance. Two years later, following a remarkable career, the veteran Baptist passes away.

For her part, Mary Gambrell helps form the WMU of Mississippi in 1878. The couple experiences great tragedy in 1887 when their son, Roderick Dhu Gambrell, is killed during liquor riots in Jackson, Mississippi.

From the crucible of the Civil War are shaped many future leaders of the Southern Baptist Convention, few of whom are more successful than the Confederate scout who sneaked behind enemy lines to steal away his beautiful bride.