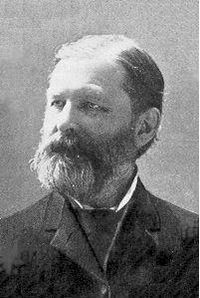 While Washington D.C. is alarmed at the news of a possible Confederate invasion (which comes of naught in the days ahead), further to the north this month the pastor of the Hanson Place Baptist Church in Brooklyn, New York composes a song that will be long remembered.

Robert Lowry (1826-1899) is a Philadelphia native who at the young age of seventeen became a Christian. While his parents attended a Presbyterian church, Lowry busied himself with the study of scripture and decided to become a Baptist. He was subsequently baptized by Rev. George B. Ide, D.D and joined the First Baptist Church of Philadelphia.

Initially deploying his Christian energies into Sunday School work, Lowry soon felt called to the ministry. Following college, he was ordained by and became pastor of the First Baptist Church of West Chester, Pennsylvania in 1854. Four years later in 1858, Lowry accepted the call to pastor the Bloomingdale Baptist Church in New York City, and then in 1861 became the pastor of the Hanson Place Baptist Church.

And so it is that on a hot July afternoon in New York an exhausted Lowry, pausing for a rest, experiences a vision.

The weather was oppressively hot, and the author was lying on a lounge in a state of physical exhaustion. He was almost incapable of bodily exertion, and his imagination began to take to itself wings. Visions of the future passed before him with startling vividness. The imagery of the Apocalypse took the form of tableaux. Brightest of all were the throne, the heavenly river, and the gathering of the saints. While he was thus breathing heavily in the sultry atmosphere of that July day, his soul seemed to take new life from that celestial outlook. He began to wonder why the hymn-writers had said so much about “the river of death,” and so little about “the pure river of water of life, clear as crystal, proceeding out of the throne of God and of the Lamb.” As he mused, the words began to construct themselves. They came first as a question of Christian inquiry, “Shall we gather?” Then they broke out in chorus, as an answer of Christian faith, “Yes, we’ll gather.” On this question and answer the hymn developed itself. The music came with the hymn. The author never has been able to tell which had priority of birth. They are twins. When song had formulated itself, the author sprang up, sat down at his organ, played the time through, and sang the first stanza and the chorus. Then he wrote it out.

The song that came to Lowry goes like this:

Shall we gather at the river,
Where bright angel feet have trod,
With its crystal tide forever
Flowing by the throne of God?

On the margin of the river,
Washing up its silver spray,
We will talk and worship ever,
All the happy golden day.

Ere we reach the shining river,
Lay we every burden down;
Grace our spirits will deliver,
And provide a robe and crown.

At the smiling of the river,
Mirror of the Savior’s face,
Saints, whom death will never sever,
Lift their songs of saving grace.

Soon we’ll reach the silver river,
Soon our pilgrimage will cease;
Soon our happy hearts will quiver
With the melody of peace.

“Shall We Gather at the River,” appearing in a song book collection the following spring, quickly becomes a hit at a time when the burdens and death of war have too long hovered over the national landscape.

In the decades following Robert Lowry lives a remarkable career as a well-known hymn writer, composing many songs and editing numerous song books, including hymnals.