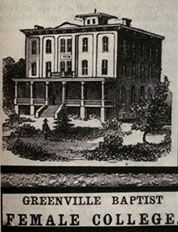 This month the Southern Carolina Baptist Confederate newspaper applauds the fact that Greenville Baptist Female College is filled to capacity. Traditionally a finishing school for young ladies–reinforcing the Southern view of women as homemakers whose role is that of faithful wife and mother–the prolonged, bloody war adds a second dimension to women’s place in the South in the face of the closure of most male colleges: that of intellectual companion for husbands.

White Southern elites pride themselves on their superior intellect. Many are convinced that white women are destined to places of importance after the South wins the war against the abolitionist North, as a Confederate Baptist commentator intones.

It will be a beautiful spectacle, to behold a sister supporting, by her intellectual accomplishments, a patriot brother, disabled in the service of his country.

Another commentator contends that educated women will

spread literary culture, refinement and grace, which will smooth the wrinkled front of war and give dignity and elegance to peace.

Such thoughts ease the discomforting knowledge that the Confederate Army is, at the moment, fairing poorly in important campaigns in Virginia and Georgia. White Baptist elites have little choice but to believe that the South will win the war (faith in God’s favor upon the slave-based Confederacy and awareness of financial ruin should the Confederacy lose ensures such belief), while yet acknowledging that the war has devastated the white male population of the South.

Southern Baptists, however, are not the only Baptists who celebrate the education of women, as a brief article in today’s New York Times testifies.

The annual commencement of this institution took place at the Calvary Baptist Church in Twenty-third-street, near Fifth-avenue, a few evenings since. There was a large audience in attendance. The exercises consisted of the reading of compositions written by the graduates, and vocal and instrumental music. But the most attractive feature of the occasion was the reading of the reports by the several committees on the branches of studies pursued by the young ladies, and read by Prof. OWEN of the Free Academy, and others. These reports illustrated the course of instruction pursued by the pupils in that institution. The compositions written by the young ladies were creditable to their authors and the mental discipline of the school. The highest honors were conferred upon the following young ladies: In French, Miss Nettie M. Bradley. Penmanship, senior department, B. Price; Mid., J. Bradley. Composition, the first honor to Sarah P. Baldwin; second, Vienna Young. In Mathematics, first honor to Sarah P. Baldwin; second, Vienna Young.

The South’s loss in the war and the post-war years following prove to be much different than white Baptist elites hope. While during the decades following the war Southern white women remain cordoned off in subordinate roles as keepers of their households and of the (glorified) memories of their fallen men, Northern (American) Baptist women become ever more empowered in an expanding realm of social services, political activism and intellectual endeavors.