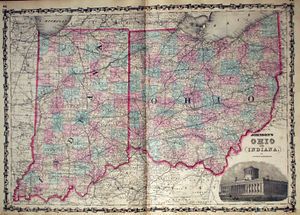 John R. Bowles, born June 13, 1826 in Lynchburg, Virginia, is a free black and a Baptist minister. As a young man, Bowles settled near Chillicothe in Ross County, Ohio, marrying Sarah Jane Bryant in 1848. There the couple grew their family, in addition to participating in the Underground Railroad.

At thirty years of age, Bowles in 1856 became the pastor of Chillicothe’s First Anti-Slavery Baptist Church (otherwise known as the First Baptist Church). The African-American congregation was active in opposing slavery on multiple fronts, including a traveling choir, under the direction of director James D. Hackley, whose members spoke to audiences concerning slavery. On musical talents alone, Hackley’s choir was considered among the best of choirs in southern Ohio.

In addition, in the 1850s the church operated a school for young black children.

Bowles remained as pastor of the Anti-Slavery Baptist Church until 1860, after which time he stepped down and sought to enroll in the Union Army. Not until 1863, however, did the United States finally open military service to black men.

In 1863 and 1864 black men signed up for military service by the tens of thousand, eager to fight for the freedom of enslaved African Americans. Nonetheless, to the disappointment of Bowles (and many other black Baptists), Ohio refused to raise African American regiments. Many Ohio blacks left their home state to enlist in other regiments, especially in Massashusetts. Bowles, giving up hope of enlisting in an Ohio regiment, joined the 55th Massachusetts Infantry African American regiment on February 18, 1864.

Returning to Ohio, Bowles again serves as a Baptist minister in Chillicothe, as well as in Cincinnati and Xenia. In addition, he teaches in Ohio’s public school system, becoming (by some accounts) the first African American to be salaried by the Ohio Public School Fund (and possibly the first African American public school teacher in all of Ohio).