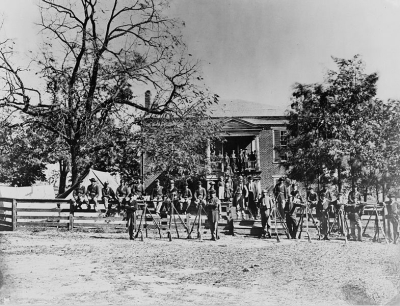 Today, four years to the day after the war began with the South’s assault upon Fort Sumter, the formal surrender of the Army of Northern Virginia takes place.

The Federals await at Appomattox Court House as the Confederates break camp for the last time early this morning and march up the Richmond-Lynchburg Road to lay down their arms.

Chosen by Grant to represent Union forces in the ceremony is General Joshua L. Chamberlain of Maine (1828-1914), while Lee‘s chosen officer is General John Brown Gordon of Georgia (1832-1904). Both men enlisted in the war as low-level officers, having no military training beforehand. Yet both proved to be extremely capable leaders and men of great courage, qualities that eventually led each to the rank of general. Today these two men play the prominent roles in the surrender ceremony that effectively seals the United States’ victory over the Confederacy.

Marked consideration and courtesy were exhibited at Appomattox by the victorious Federals, from the commanding generals to the privates in the ranks. General Meade, who had known General Lee in the old army, paid, after the surrender, an unofficial visit to the Confederate chieftain. After cordial salutations, General Lee said playfully to his former comrade in arms that years were telling upon him. General Meade, who had fought Lee at Gettysburg and in many subsequent battles, made the strikingly gracious and magnanimous answer: “Not years, but General Lee himself has made me gray.”

Some of the scenes on the field, immediately after the cessation of hostilities and prior to the formal surrender, illustrate the same magnanimous spirit, and were peculiarly impressive and thrilling. As my command, in worn-out shoes and ragged uniforms, but with proud mien, moved to the designated point to stack their arms and surrender their cherished battle-flags, they challenged the admiration of the brave victors. One of the knightliest soldiers of the Federal army, General Joshua L. Chamberlain of Maine, who afterward served with distinction as governor of his State, called his troops into line, and as my men marched in front of them, the veterans in blue gave a soldierly salute to those vanquished heroes–a token of respect from Americans to Americans, a final and fitting tribute from Northern to Southern chivalry.

At the sound of that machine-like snap of arms, General Gordon started, caught in a moment its significance, and instantly assumed the finest attitude of a soldier. He wheeled his horse, facing me, touching him gently with the spur, so that the animal slightly reared, and, as he wheeled, horse and rider made one motion, the horse’s head swung down with a graceful bow, and General Gordon dropped his sword-point to his toe in salutation.

By word of mouth the general sent back orders to the rear that his own troops take the same position of the manual in the march past as did our line. That was done, and a truly imposing sight was the mutual salutation and farewell.

Bayonets were affixed to muskets, arms stacked, and cartridge-boxes unslung and hung upon the stacks. Then, slowly and with a reluctance that was appealingly pathetic, the torn and tattered battle-flags were either leaned against the stacks or laid upon the ground. The emotion of the conquered soldiery was really sad to witness. Some of the men who had carried and followed those ragged standards through the four long years of strife rushed, regardless of all discipline, from the ranks, bent about their old flags, and pressed them to their lips.

And it can well be imagined, too, that there was no lack of emotion on our side, but the Union men were held steady in their lines, without the least show of demonstration by word or by motion. There was, though, a twitching of the muscles of their faces, and, be it said, their battle-bronzed cheeks were not altogether dry. Our men felt the import of the occasion, and realized fully how they would have been affected if defeat and surrender had been their lot after such a fearful struggle.

Like Gordon, Chamberlain occupies the office of governor following the war, serving four terms as Governor of Maine.

On this day of ceremonial surrender, many of the Confederate officers and soldiers who stack their arms are Baptists. One is Captain Walter A. Whitted, senior officer of the 55th North Carolina Infantry Regiment. Wounded twice during the war (at Gettysburg and Hatcher’s Run, VA),  Whitted’s skeletal regiment upon surrender consists of four officers and 77 men. Most other Confederate regiments are likewise a mere shadow of their former numbers.

Upon stacking their arms, the Confederate officers and soldiers soon begin journeying toward home, many having no option but to walk for hundreds of miles.

While the former members of the Army of Northern Virginia begin their long, sad treks homeward, Verina Davis, wife of former Confederate president Jefferson Davis, tonight departs from Chester, Virginia with a wagon train guarded by a contingent of soldiers and sailors and carrying Confederate cash en route to either South Carolina or Georgia, although she knows not which. In the darkness the wagons pass the Woodward Baptist Church.

In North Carolina Jefferson Davis desperately tries to rally what remains of Johnston‘s and Beauregard‘s armies, the former of which evacuates Raleigh this day in order to avoid capture by Sherman‘s advancing Federal forces.

With the South’s primary army disbanded, remaining forces in tatters and Confederate officials in flight, the curtain falls on the Confederate States of America. The surrender of remaining Confederate armies in the weeks to come is but a footnote in the story of the war.

On the other hand, a new chapter in the South begins this day in the story of freedom for all, a story of which the war and the Emancipation Proclamation had been a prologue in the larger fight for freedom in America. In the weeks and months and years to come, black Southerners traverse an upward if shaky trajectory, of which black Baptists are often at the forefront.