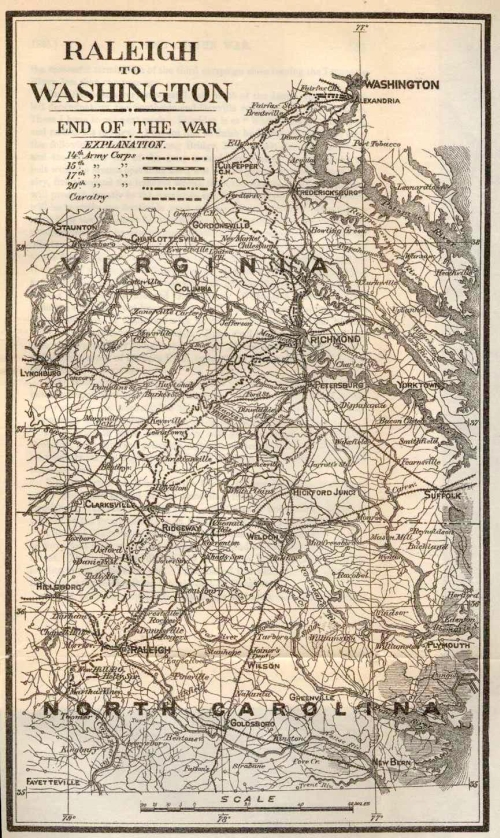 Four days after Lee‘s surrender to Grant, the city of Washington is still celebrating, black and white alike. Today has been designated as a city holiday for workers, replete with parades and marching bands.

The celebration continues into the evening, the city ablaze with bonfires and calcium lights, a current version of street lighting. Fireworks illuminate the night sky. The Lincolns take a carriage ride to see the lights. And somewhere among the revelers is a sullen John Wilkes Booth, Confederate sympathizer and pro-slavery advocate. Booth’s plans to assassinate Lincoln have thus far fallen through, but he remains determined to snuff out the life of the president.

As the North celebrates, some remnants of the Confederate Army struggle on, unwilling to admit defeat. Sherman advances on Raleigh early in the morning, only to discover that the Confederate forces defending the city have fled. A peaceful surrender of the city spares Raleigh of major destruction.

The church clerk of Raleigh First Baptist Church relates, in the church record book, the events of this day and weeks following:

This morning just before the rising of the sun, Gen. W. T. Sherman at the head of a hundred and thirty thousand Federal soldiers entered the city of Raleigh; the city having been surrendered to him by the authorities …  little violence was offered the citizens though all houses were seized and every kind of firearm was confiscated ….

Union soldiers remain in the city for several weeks, during which time church services are suspended.