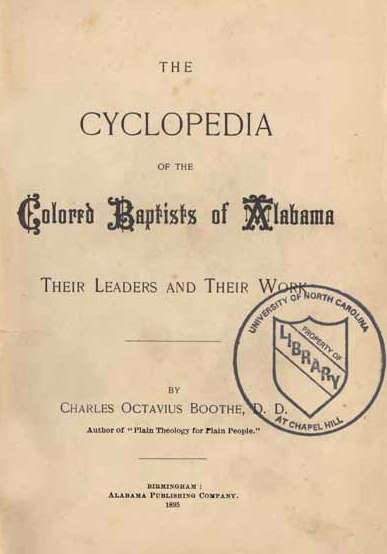 In Alabama colored Baptists are exercising their freedom to organize and attain education. Of these months following the war, one observer noted: “Of course there was no association, no convention, no graded school of learning. The colored people of Mobile enjoyed superior advantages over those of other sections of the State and hence many of them had made fair attainments in letters. But in all the State there was but one Baptist preacher, to the writer’s knowledge, in April, 1865, who could, with any degree of honesty, claim to be an educated Baptist negro preacher.”

At this present point in 1865 the “wandering life” now characterizes “the masses of the people,” while “the minister in one part of the State” does not know “the minister in the other part.” African American Baptists of Alabama own two “frame buildings” in Mobile, the city from which the expansion of black Baptist work emanates in the years to come. Not surprisingly, there is “no union, no plan of agreement.”

In other states of the South, however, African American Baptists are organizing into associations and conventions, a pattern that Alabama black Baptists soon follow.

By the end of the century, the “colored Baptists” of Alabama are large in number and well organized.

Source: Charles Octavius Booth, The Cyclopedia of the Colored Baptists of Alabama: Their Leaders and Their Work, Birmingham: Alabama Publication Company, 1895, including image; digitized by Documenting the American South, University of North Carolina at Chapel Hill (link)