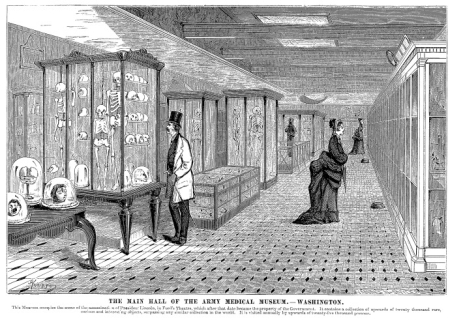 Engraving of the Army Medical Museum housed in Ford’s Theatre from the book, “Ten Years in Washington: Life and Scenes in the National Capital as a Woman Sees Them” (1874).

Today the owner of Ford’s Theater, the former site of the First Baptist Church of Washington, D.C. and the place where former U.S. President Abraham Lincoln was assassinated, agrees to lease the building to the War Department.

In reality, the theater has been under the control of the U.S. government since the assassination. Military guards have guarded the building, with the War Department issuing passes to access the theater. Nonetheless, apparently some of those who managed to gain access to the building carried away souvenirs. An article in today’s Quincy Daily Whig (Illinois) speaks of the matter, with a bit of humor:

Curiosity hunters have invaded Ford’s Theater and made sad havoc with everything they could lay their hands on. A good story – a little fishy – is told by the New York Times of one of the irrepressible fellows; “One of these curious visitors entered the saloon adjoining the theater, where Booth took his last drink of brandy, just before he murdered Mr. Lincoln. The visitor inquired of the barkeeper: “Have you the same  bottle on hand out of which Booth drank on the night of the assassination?” “Yes, sir.” “And the same brandy in it?” “Can I have a drink of that same brandy out of the same bottle?” “Yes, sir,:” “Let’s have it.” The visitor tastes the brandy, makes a wry face and continues: “And that’s the same brandy that Booth drank?” “Yes, sir.” “Well, I don’t wonder that he killed the President. A drink of that brandy would make a man kill his grandmother.”

The War Department in turn gives Ford permission to reopen the theater, and he immediately announces a new play, “The Octoroon.” The War Department, however, changes its mind. Fearful of someone burning the building, soldiers lock the theater and refund those who had purchased tickets. Never again is a play held in the theater. For about a year the government pays Ford $1,500 monthly and remodels it to house the Army Medical Museum. In June 1866 the government purchases the building for $88,000.

Meanwhile, the congregation of the Bloomfield Baptist Church of Kentucky, having survived the war years, takes stock of their situation. In “1861, ’62, ’63 and ’64, the church was disturbed by the presence of soldiers during these war times.The meeting-house was occupied by Federal troops for some time, and we were obliged to hold meetings in the Reform and Methodist churches.” Today, “the deacons were appointed a committee to ascertain the damages done to our house and lot by the soldiers, and to petition the government at Washington for remuneration.” The Bloomfield church is one of many in the South and Border States in the post-war years that petition the government for reparation for damages to their building.