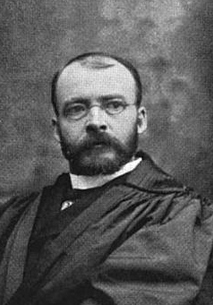 A Canadian by birth (1848), Philip S. Moxom grew up in Illinois and as a 14-yeard old marched off to fight for his new country as an attendant, or “boy,” to Captain Bewley of the 78th Illinois Regiment. On October 3, 1863, a then 15-year old Moxom enlisted as a soldier in the 17th Illinois Cavalry.

Surviving the war, today Moxom is discharged from his service in the Union Army. The rest of his life beckons.

On January 1, 1866 the young veteran enrolls in Baptist’s Kalamazoo College in Michigan. While in college, he accepts Christ and is baptized.

Eschewing a teaching career for the ministry, Moxom is ordained in Michigan in 1871. Over the next twenty years he pastors churches in Michigan, New York, Ohio and Massachusetts, completing degrees from the University of Rochester, also a Baptist institution, along the way. In Boston, Moxom pastors the influential First Baptist Church.

A biographical sketch says of Moxom, “He is a clear thinker, an incisive writer, and a fearless and magnetic speaker.”

Source: John Clark Rand, editor, One of a Thousand: A Series of Biographical Sketches of One Thousand Representative Men in the Commonwealth of Massachusetts, Boston: First National Publishing, 1890, p. 432 (link)