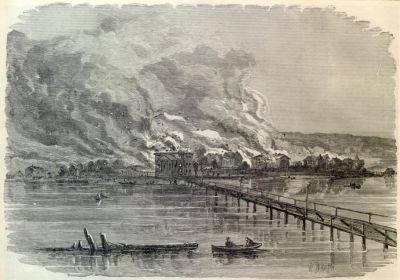 The Confederate Burning of the Town of Hampton, Virginia

United States forces occupy Fort Monroe in Virginia, with plans to transform the nearby town of Hampton into a base for quartering troops and former slaves who have escaped behind Union lines and to freedom under President Lincoln’s contraband policy. Upon reading this morning’s newspaper, Confederate Gen. John B. Magruder learns of Union intentions. Unwilling to allow the town to be overrun by freed slaves, he orders Hampton resident Capt. Jefferson C. Phillips to immediately torch the town. Following Magruder’s orders, the Old Dominion Dragoons militia set fire to Hampton.

By nightfall, some thirty businesses and one hundred homes have burned to the ground. Confederate forces retreat from the area, never to return.

Among the burned buildings is the Hampton Baptist Church’s meeting house:

Included in the destruction was the loss of Hampton Baptist Church’s meeting place and its records.  A witness reported:

The church was burning like a furnace and the flames were belching out of its steeple like an inferno… it seemed as if hell itself had broken lose and all its fiery demons were pouring oil on the flames.

In the aftermath of this disaster, Pastor George Adams became a chaplain in the Confederate Army, but continued to shepherd the remnant of his flock until 1862, when Union forces arrested him as a spy.  With their pastor imprisoned on the Rip Raps in Hampton Roads, and the congregation scattered by the forces of conflict, the church reached a new low point in its life.  President Lincoln emancipated the slaves in 1863.  By 1865 the large, black contingent in the membership withdrew to form a separate church, the first congregation in Hampton composed exclusively of “colored” Baptists.  That historic black church came to be known eventually as First Baptist Church.

The Union Army remains in control of Hampton throughout the war. Upon the ashes of Hampton, new life arises as emancipated slaves establish the first self-sustaining African-American community in the United States. In November, the northern American Missionary Association appoints Mary Peake Smith, the first black teacher of the AMA, to instruct children of freedmen. In 1863, under a large oak tree, the first reading of the Emancipation Proclamation in the South takes place in Hampton. In addition to the post-war establishment of the African American First Baptist Church, Hampton Normal and Agricultural Institute (later Hampton University) is founded, in part by the American Missionary Association, on the site of the Emancipation Oak to provide higher education to freedmen.